XMen shown a little love
Gave XM a little makeover with a set of extended protectors and clear inlanes.

Added a sub filter to MMR LE with the original speaker still fitted, with the new software update you can balance the backbox and cab speaker which saves me putting a level control in.
It has improved it but had to balance out the bb speakers to about -100 for the cab speaker to be heard. Just crank up normal volume and all good.
Sounds clearer so cab speaker must have been interfering as bb speakers are still original.
Will fit another proper 6.5” bass speaker and see how much it can be improved, don’t fancy ripping the baffle off to fit an 8” if I don’t have to.

Had an 8 ohm Kevlar speaker I took out of my old BSD to try out, would get more output with a 4 ohm but this was free!
Just fitted in under the trolls and sounds pretty good, the arrow at the end of the game has some nice sub bass which I never heard before.
No need for an 8” and ripping the baffle out

BB speakers next but they don’t sound too bad now actually!

TZ, my last problem that has been giving grief since I bought it has been the usual powerball proximity sensor set up for the trough.
The coil is a bit beat up but it was sensing all be it very close. It stopped working although the red light was doing its thing.
Hard wired the cables to and from sensor board and fitted a new optocoupler chip u2.
Working now but I had ordered a new board set from Tangles in Australia ready for when it goes wrong again.
View attachment trim.82B47069-8101-4CC1-8EC0-05CC45F7B2D0.MOV

External pin room wall, had spare TAF and TZ glass and translites. Thought about making a backlight box but this will do


Replaced with a premium pack from Pinball Center but left with a load of spares and maybe a couple post rubbers missing.
How do people replace rubbers if kits are missing some?


Replaced with a premium pack from Pinball Center but left with a load of spares and maybe a couple post rubbers missing.
How do people replace rubbers if kits are missing some?
Click to expand...

I just bought a huge amount of rubbers in every size which works out expensive to start but in the long run vastly cheaper than pre made sets. This is only cost effective if you have a larger lineup or a regular turnover of pins to shop out.
If I was sent a kit with missing rubbers id contact them so the next customer doesn’t have the same problem and I’m sure they would forward on FOC

I pulled at part my blackout so I could help out a person on pin side that asked me for a scan..
Putting it back together...
Has been a while so it is a bit challenging to remember on what went we’re...lol


Replaced with a premium pack from Pinball Center but left with a load of spares and maybe a couple post rubbers missing.
How do people replace rubbers if kits are missing some?
Click to expand...

I would be more shocked if a rubber kit was actually correct!

Decided to mess about with the head on Lucky Strike next. I've removed the board from the head for ease of access to the mechs and starting with the score reels. It's been ages since I worked on an EM so quite looking forward to it

A couple of fixes on Rick & Morty today. The plastic hinge that allows the UFO to move up and down snapped on my machine. There's been quite a few reports of this on pinside. Spooky sent me 3 new plastic pieces ( that instils confidence!

I rebuilt the house that looked like Stevie Wonder had put it together. It's just a folded piece of plastic screwed to some 3d printed roof parts. I had to reposition a few of the screws to straighten the whole thing up. I should have taken a before photo but it definitely wouldn't have passed building regs

Added a post to a hard to reach spot under the house where a ball would sometimes get stuck.

Added some insulators to the back of optos in the ship area where they were very close to a ball guide. Also one of those guide bars had worked loose and kept lifting so fixed it in with Epoxy.

Meeseeks are happy now, except one of them!

To finish off on R&M I waxed the playfield while it was apart, what a mistake that was! it's barely playable now! I think I'll throw some dirt back on.


I had to replace a flipper coil stop on GOTG which was falling apart. Apparently this is very common on Sterns but it's honestly the first time it's happened on one of mine.

Backboard finally arrived from Russia....
Thought I would give the back board a spruce up

Been getting busy on Pinbot. Absolutely loving this game.
Replaced toasty transistor to fix drop targets resetting.
Ripped out some bodge wiring and ikea leds!!
Replaced mains cord and line filter to eliminate the light fitting

.
Added the inline fuses for the rectifiers.
And finally replaced the plunger barrel spring and sleeve. Nice smooth plunge now.
she’s a beaut.

a ceiling rose? FFS! who are these muppets? probably that twat Backhouse.

Three of four score reels stripped down, cleaned, lubed and rebuilt along with the reel cage. Just the 10k point reel to do which is a bit different to the others as it has the small PCB on it. After that I'll have a look at the stepper units. I can already see that the springs on those have been shortened, probably to keep them moving when they started to gum up so I expect I'll need to replace them. Something quite therapeutic about working on an EM game and a nice change from the SS stuff

Today I setup up my GOTGLE at my nieces house.
Pinball is too good to keep to yourself and sometimes you just have to share the love.
Her husband loves playing this everytime they visit but due to the NE being on lockdown that’s not happening so I’ll take the love to him where he can get a real feel for it over the next few months.

And I... fixed GI problem on my BOP and fitted it with mirror polished steel blades...

Guardians before and after 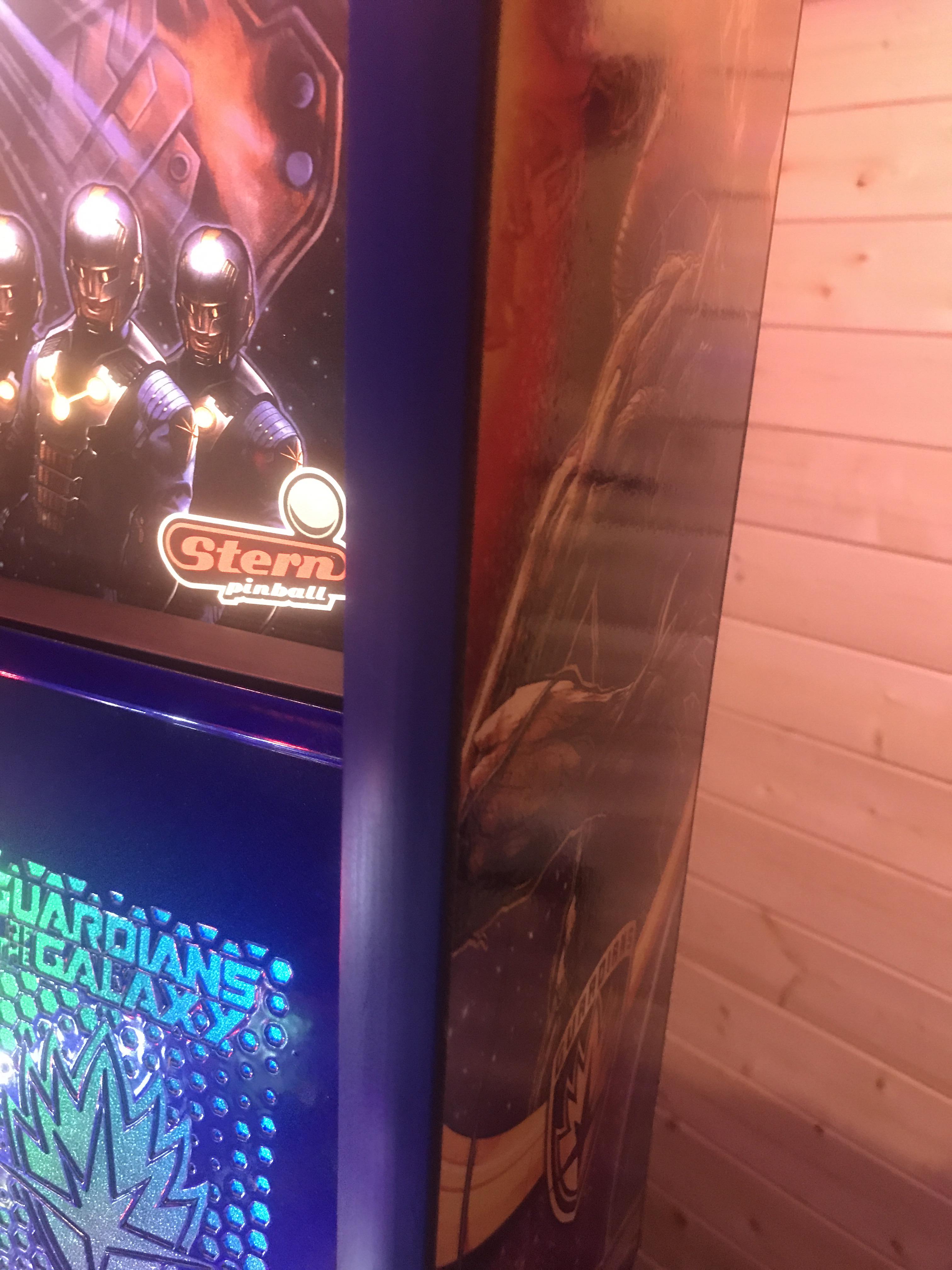 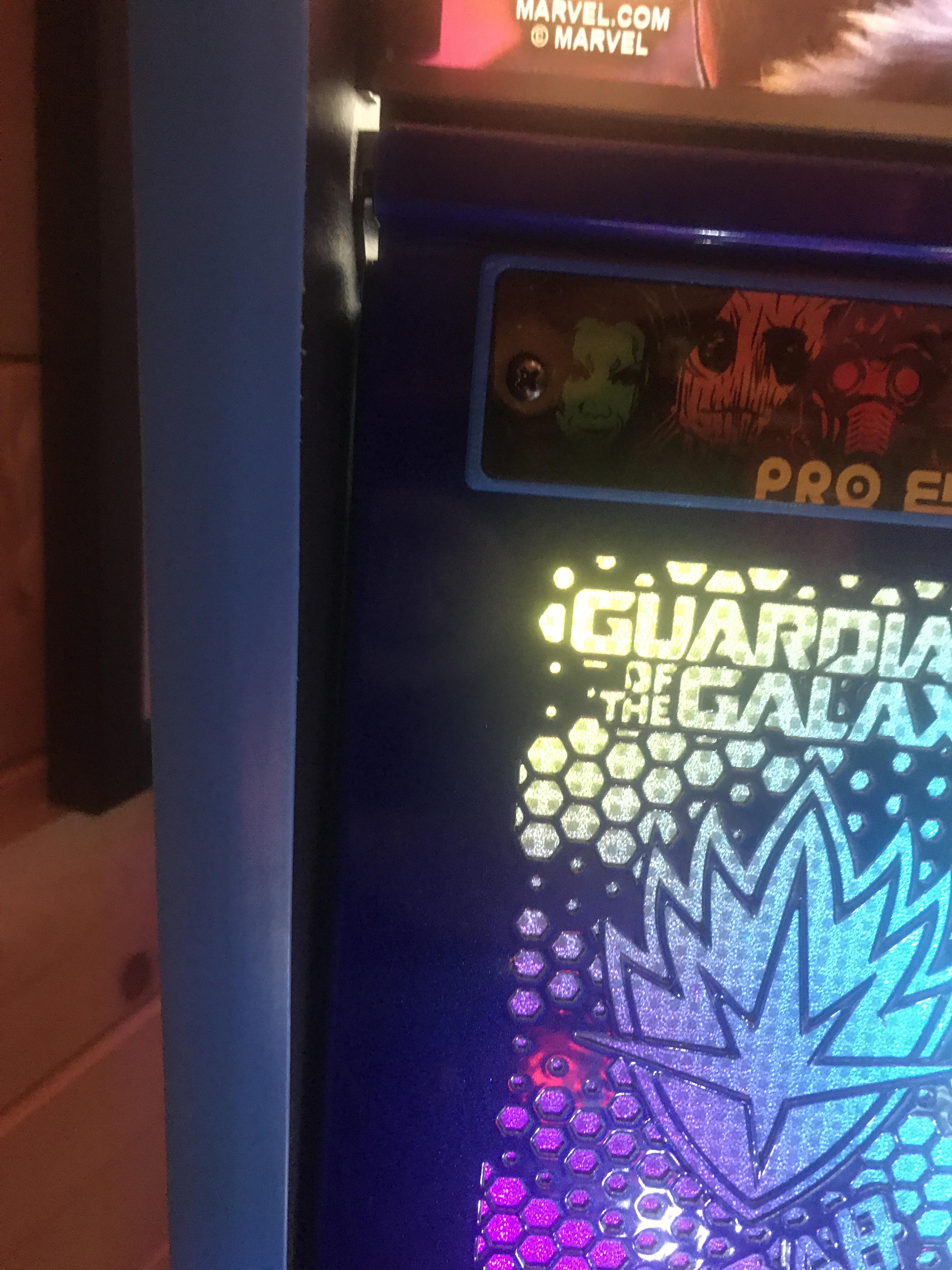 Been a while- but got siderails off AFM
a few weeks back.. used Hair dryer and pallet knife. They were stuck in with some really strong, Wide tape..

Did take some of the decals off with the tape.
Used a blade and straight edge, scored just above the Siderail line, Peeled off all
The remaining decal and used goo gone to take off all the residue.

Why does nobody ever straighten their Plantir target when it’s a 30 sec job? - my OCD doesn’t approve!


Sent from my iPhone using Tapatalk

@Andydn is it though? It was bugging the hell out of me earlier but couldn’t figure how to do it, in the time I had to get back for football. Any ideas? Couldn’t see what to loosen up all looked very rigid.

James said:
@Andydn is it though? It was bugging the hell out of me earlier but couldn’t figure how to do it, in the time I had to get back for football. Any ideas? Couldn’t see what to loosen up all looked very rigid.
Click to expand...

Under the playfield the switch is held together by two screws (in Bally/Williams these were rivets). Loosen - straighten - tighten!


Sent from my iPad using Tapatalk

That looks peachy, makes me want one again.

Paragon getting some new makeup 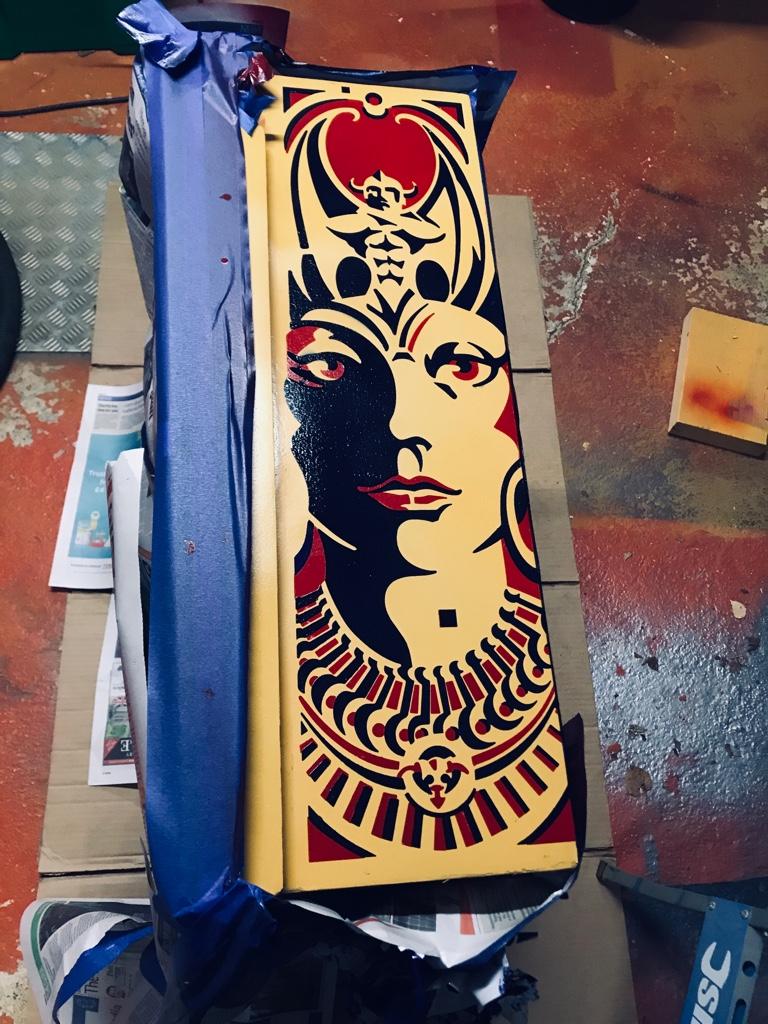 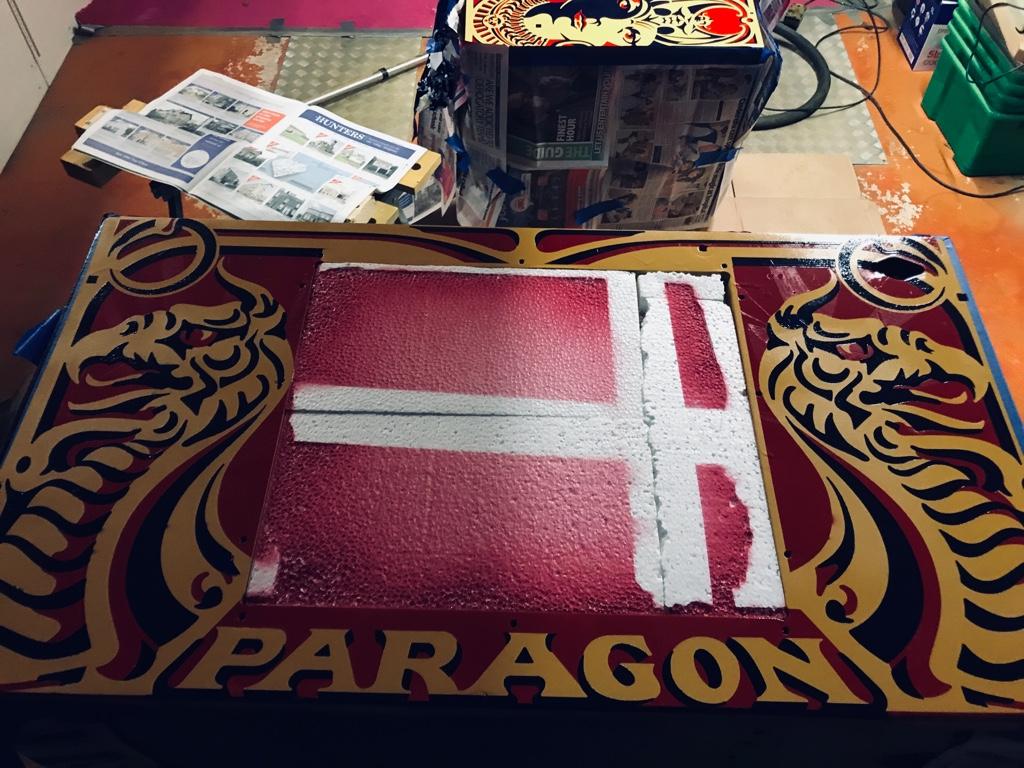 The lengths some people go to.... to squeezing in one more game...

Have taken heated off wall, moved CFBL down as far as it would go.
Still not enough space, so.. CTBL forward and TBL tucked slightly behind, giving 76cm to fit AFM in...

Now where to put G&R when it arrives...