In Progress (Yet another) Cosmic Gunfight

The outhole solenoid has the terminals facing upwards?

Ha haaaaaaa- I did the same thing with my eight ball deluxe. real schoolboy error

. I felt such a pillock
J

Almost as embarrassing is allowing the non-return wire on the trough ramp to flip over while the cover is off, and having the outhole solenoid unable to throw balls onto the trough switches.
OP

I fixed it now - but of course now the solenoid aint firing. So I guess i've killed the transistor. (Voltage looks to be there so im guessing the pulse isnt)
Karma for not having to replace the stuck bumper one really I guess.

On the plus side the new transistors appeared today so will bang one in this evening.. see how it works out

Jay Walker said:
Almost as embarrassing is allowing the non-return wire on the trough ramp to flip over while the cover is off, and having the outhole solenoid unable to throw balls onto the trough switches.
Click to expand...

well, shamed to admit that i did that too

Ive not actually put the cover on when that's happened.. but its flipped a number of times and still I look to make sure ive put it back the right way
OP

Transistor replaced. Solenoid is alive again. Now to play it again and see what teething troubles there are.

Having finished rebuilding the playfield thought I would have go at fixing the backglass.
I will quite likely end up buying a replacement. But then what would I do with the old one. So armed with the knowledge that im probably going to get a new one I have nothing to lose by trying to fix it. 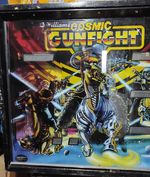 Some of the plastic remains here - but ringed areas are pretty much missing.
So, off to photshop land we go.

Irritatingly ive lost a bit when removing some of the masking tape having painted the black. And I lost part of my T. However, Still looks way better than it did. I can touch these bits up I think.
You must log in or register to reply here.
Share:
Facebook Reddit WhatsApp Email Share Link
Menu
Log in
Register
Install the app
Top Bottom