Neil McRae said:
For some BW games (WPC95 games mostly) I would use:

Totally agree - these bulbs are fantastic.

Some Mando love going out today.

Set of protectors in Flourecent Orange and Spectrum LED Orange speaker inserts to replace the crap stern ones along with a Plaque Plate.

VeeMonroe said:
I received a Fish Tales, which is my first pinball machine (well, full-sized one, anyway) a couple of weeks ago.

It had a bunch of minor niggles despite being sold as ‘in full working order’ (I kinda expected that).

Anyway, I started by fixing a ball jam in the left lane, which was due to 3” rubbers on the slingshots. These have now been replaced by 2 1/2” Perfect Play silicone rubbers in white.

The next job was finding an occasional error in the Caster’s Club, which turned out to be an elderly, broken spring. I’ve also replaced the flipper rubbers with some green Perfect Play silicones and cleaned the playfield.

We’re now both on a staycation and I’ve LED’d about half of the machine so far. I originally illuminated under the ball guides next to the flippers with some green LEDs, but we eventually decided that white ones were better (although the green ones do look cool).

I’m not happy with the LED lighting. The green LEDs are an unnatural lurid green, which doesn’t fit the fishing theme, and I find the contrast between the bright insert LEDs and weak playfield lighting visually unpleasant. I saw an Attack from Mars at Flip Out on Sunday that had strip lighting down the sides to provide extra playfield illumination. Hence, I’m considering adding strip LEDs for illumination of the centre of the playfield and, also, I’ve ordered some Comet extra-bright LEDs to try to brighten up the G.I as well.

I’m also considering an OCD LED to deal with the rapidly-moving insert lights in attract mode, but don’t have a PC to set the levels.

View attachment 144443
(Picture shows part-LED’ing. There were a couple of LEDS already when it arrived).

The bottom of the playfield seems to have water damage and there’s inexplicable white powdery gunk in some of the insert holes. I also found a *literal* spiders web inside the casing - not sure where it was being stored before I got hold of it. The game (currently) plays fine (cross fingers) though.

My four year old and toddler love it!

DONT FORGET - Turn off ALLOW DIM ILLUMINATION in the menu. The LEDs do not like being dimmed.

Pick Holder said:
DONT FORGET - Turn off ALLOW DIM ILLUMINATION in the menu. The LEDs do not like being dimmed.
Click to expand...

I have both in my RS and I love the dimming

I have both in my RS and I love the dimming

Right, which this chap does not.

I did hate LEDs a few years ago, but I was converted a while back by COMET LEDs.

Nothing does look as good as an old fashioned lamp (as I love the way it fades up and down when turned on) - but an LED looks better and keeps the heat down on those pins. These games now are getting nearer 40 years old and need to be looked after by taking the strain off them.
V

The Comet 2SMD Superbright bulbs I’ve fitted as GI seem to be doing the business. It would be nice to have *slightly* more illumination in the exact centre of the playfield, but there’s nowhere convenient to fit a spotlight.

Common area for this to occur, advice is to pop a washer under the screw to avoid it.
There’s a YouTube video by Nick Lane (Buffalo Pinball) with the exact same issue, he got away with ironing his out early.

Mine was too late for that, it actually chipped and lifted. I cut away small section to avoid it splintering further, sealed it with a thin layer of car clear coat I had, then found a perfect size washer to cover the damage, the ball can’t actually touch this washer either which is a result (I was worried about getting airballs off it). 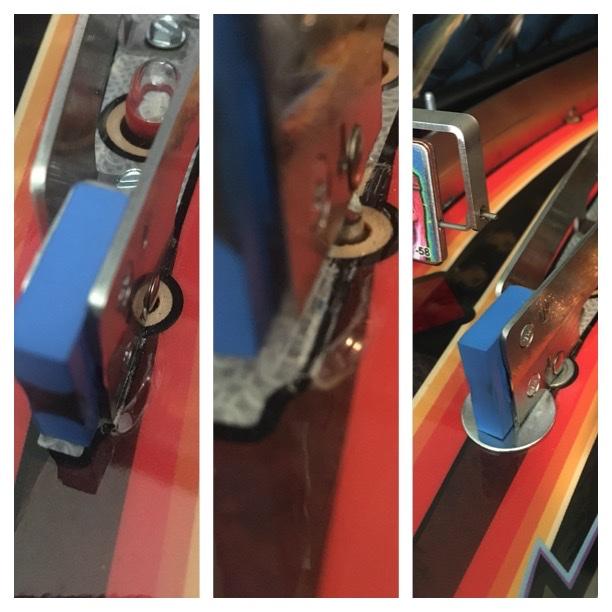 Spotted Phil / Pinball Heaven, sells a 15cm LED strip light mod. Turns out that fits the cut out in the back panel of Diner perfectly above the cup. Easy connection by using one of the #555 sockets back there so it’s all neat and tidy. Now I just need to actually clean the dirty cup! (and the rest of the playfield for that matter)

Best mod ever, about 2 hours to install but worth the effort. 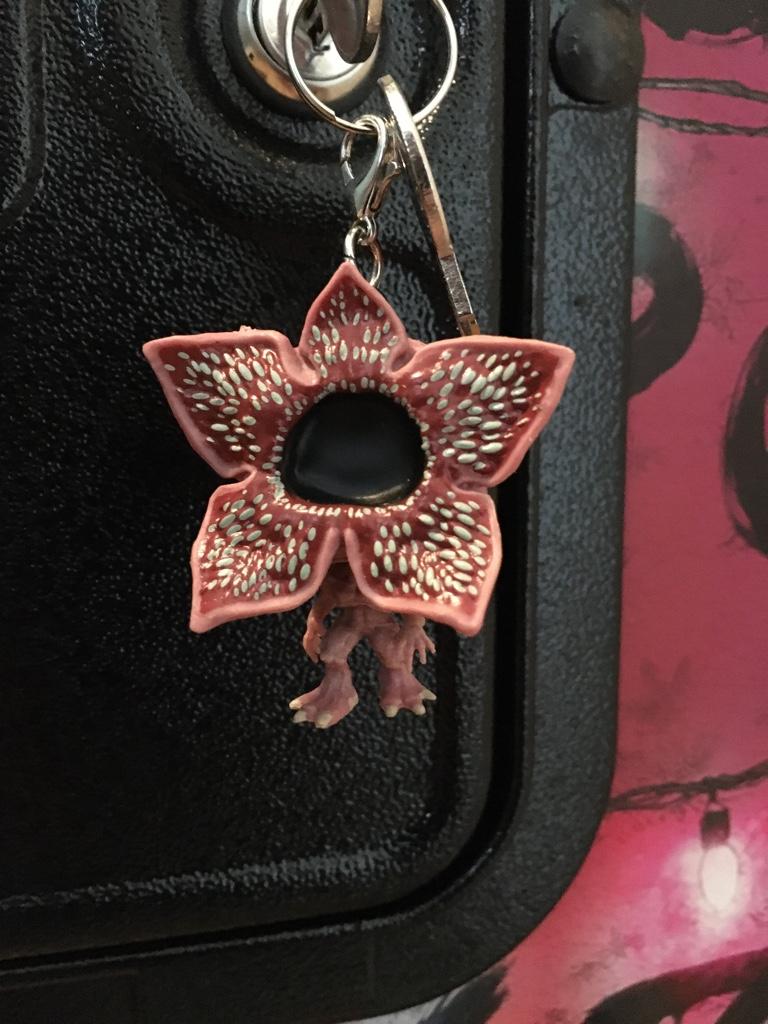 GnR stripped down. Given it a clean, installed Cliffys to scoop, trough and shooter lane. Titan rubbers installed.
Wax to do tomorrow, then rebuild and install Pin Monk fans.
Hopefully won't end up with too many extras left over

Yesterday and today I am commencing work on my 1964 Gottlieb Bowling Queen.

First up was figuring out the "Balls played" mechcnical counter contraption that someone in the UK retrofitted to the machine many decades ago. Need to decide whether to remove this, or keep it and refurb it with everything else. Hmmmmm

I had the pleasure of working on a minty Pinball Heaven restored Addams Family this morning, not mine unfortunately.

Nearly 3,900 games played by the chap since I installed it around 18 months ago and only a trough switch needed replacing.

That's pretty good going if you ask me!

Took a break from the T2 resto today and finished working on the non working Fishtales I picked up recently.

Ive never done any board work before and when I got this it had some major wiring bodge jobs due to burnt out connectors and a jumper wire going to the mpu board for its 5v supply. I have learnt so much from doing this myself rather than send the boards out. Upon closer inspection I could see 3 traces in total that were missing from J115 and J121.

I had to completely go through the wiring as who ever fitted the molex connectors cut all sorts of wires and fitted them all over the place so nothing matched up to the manual.

I removed all the junk and fitted new connectors to the driver board and to the correct wires. Installed a couple of jumper wires to fix J115 and J121.
Tested the continuity and all the voltages and switched it on. To my surprise, it came to life, I couldn’t believe it.

Fixed a few loose wires under the playfield and adjusted some switches and it plays great. I think all it needs is a new reel belt as this keep slipping??

In the picture of the cpu board, I see that the clear window of the Eprom chip is exposed. There's a faint risk of the contents being damaged unless the window's covered up; such chips are erased when required by taking off any label and putting them under uv light.

Jay Walker said:
In the picture of the cpu board, I see that the clear window of the Eprom chip is exposed. There's a faint risk of the contents being damaged unless the window's covered up; such chips are erased when required by taking off any label and putting them under uv light.
Click to expand...

Thanks for that mate, I didn’t know that could happen. I’ll get it covered up. I appreciate the heads up

Wall mounted the old vinyl, found it in parent's attic a couple of years ago thought I'd lost it.

Ant127 said:
I think all it needs is a new reel belt as this keep slipping??
Click to expand...

In case you didn't know you can use a 3.5" pinball rubber as a cheaper alternative belt replacement?

A black colour rubber one would be less noticeable.

crsedgar said:
In case you didn't know you can use a 3.5" pinball rubber as a cheaper alternative belt replacement?

A black colour rubber one would be less noticeable.
Click to expand...

I ordered replacement on Monday, but thanks for this, I didn’t know a 3.5” pinball rubber would fit, so it’s good to know for future reference .

Ant127 said:
I ordered replacement on Monday, but thanks for this, I didn’t know a 3.5” pinball rubber would fit, so it’s good to know for future reference .

Damn my timing sucks, hope it wasn't too expensive a purchase.

crsedgar said:
Damn my timing sucks, hope it wasn't too expensive a purchase.
Click to expand...

No it’s cool, it was less than a tenner

Making a pinball playfield rotisserie. Drafted in my cousin Marcus, learning how to weld.

@AlanJ , is he taking orders ?
I am looking at buying one at the moment.

replicas said:
@AlanJ , is he taking orders ?
I am looking at buying one at the moment.
Click to expand...

I’ll ask. he’s only here for another week, but i’m hoping i have learnt all the skills i need to be able to cut n weld metal by the time he leaves.

Look at all that space! Mine is taken up by machines

The rotisserie is coming along nicely - we used a chair swivel mech on one end and then a large bolt that can be tightened into a retaining ring to hold the playfield in any position.

It can accommodate different length playfields, by sliding in and out the base rails, which are then set in place with two screw down bolts.

They make a massive difference to the bottom of the playfield and are a must if you have a Turtles IMO! I also swapped the van around so it faces forward (another plastic from Col), updated the code plus a few other bits and pieces. Side blades still to install when they turn up plus I picked up the Krang and Shredder NECA figures so need to have a look at where they might fit in.

Varnishing a pinroom door that I have put off, grubby hand marks on the door pushed me over the edge

M4carp said:
Varnishing a pinroom door that I have put off, grubby hand marks on the door pushed me over the edge

3 coats each side to do though, won’t be long before I’m pouring myself a cold one!!!
View attachment 147085
Click to expand...

Is that camera wobbling due to you gulping another beer down ?

Nice work by the way

Vimtoman said:
Is that camera wobbling due to you gulping another beer down ?

Thanks, bloody thing run out after a couple of pints

Love a bit of a dance - when nobody’s looking!
Cash & Carry in the morning, which lager to get

One of the side metal parts to the loop de loop broke off on Gold Wings, was loose as only held in with one tab as the other was already broke when I got it. So every time it was hit it was flexing. The part is unobtainable. I ended up cutting the ends off a gottlieb gate I had spare and bolting them to the side ramp where the tabs has snapped off.
Wife even managed to do the loop de loop tonight!!!
Should last forever.