since the epoxy worked nicely as glue, why not try the rest with epoxy as well, makes it a little bit easier to close most gaps as well 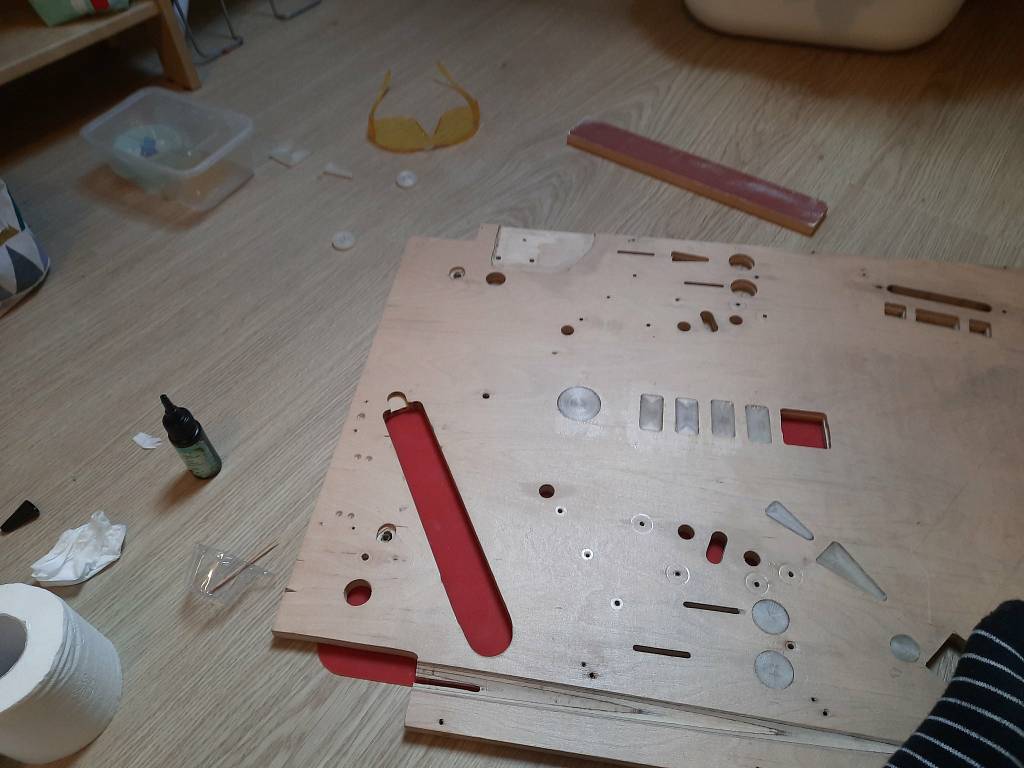 fixing the epoxy with UV light 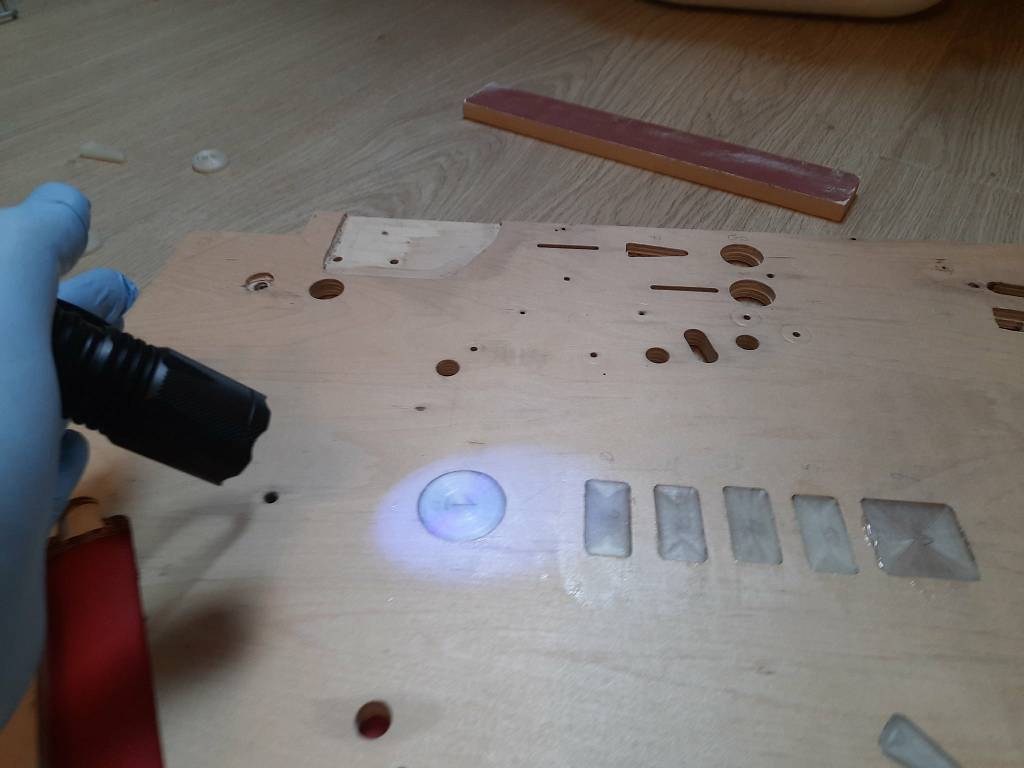 first batch fitted, next up sanding them flat (while printing some more inserts 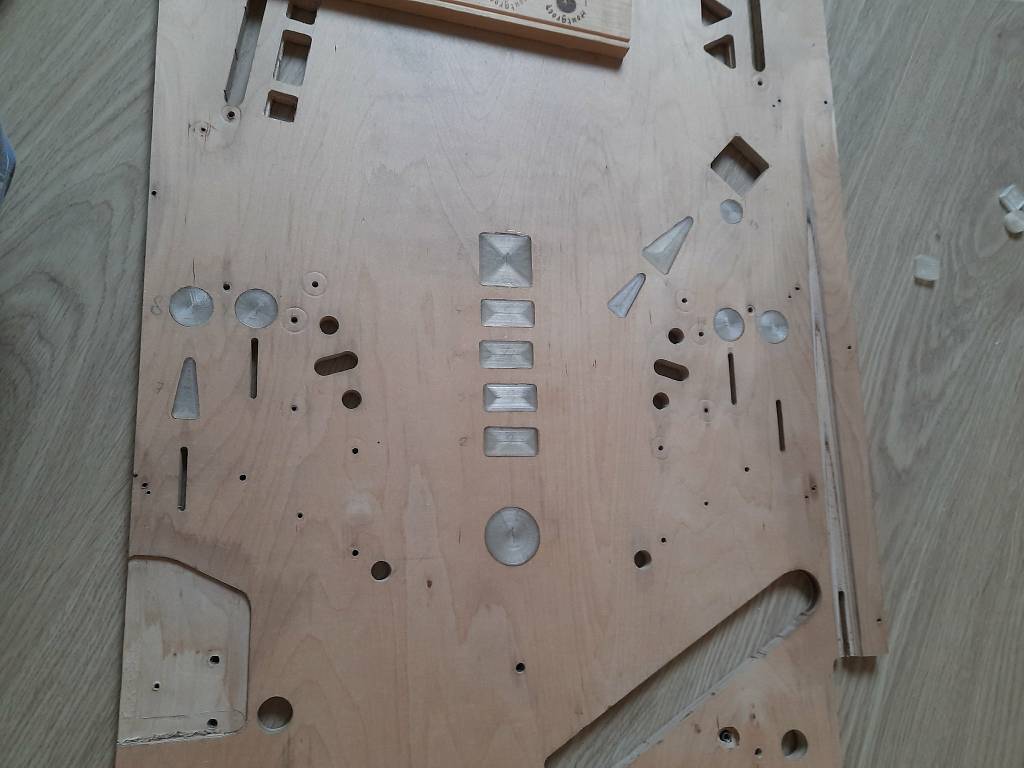 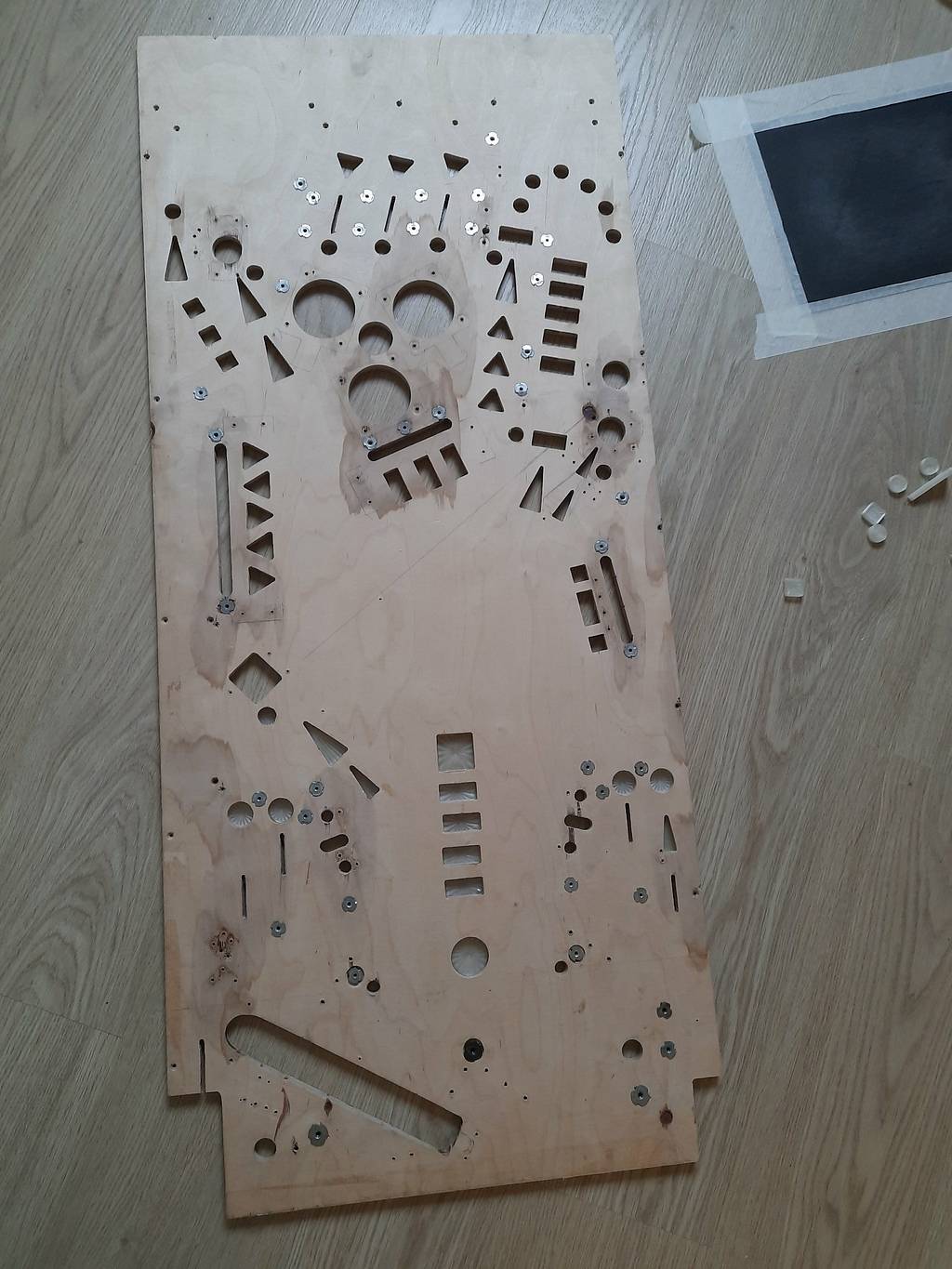 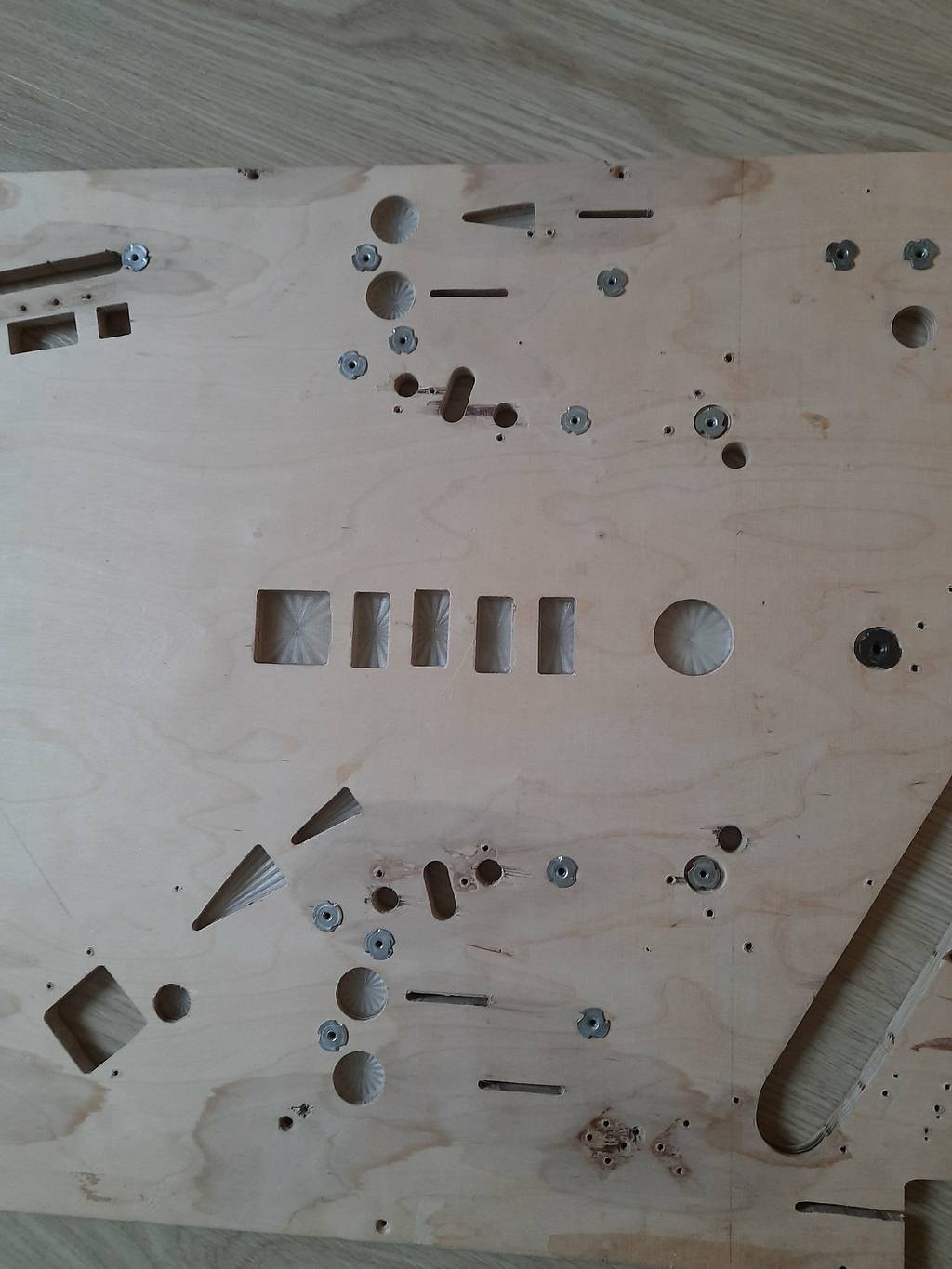 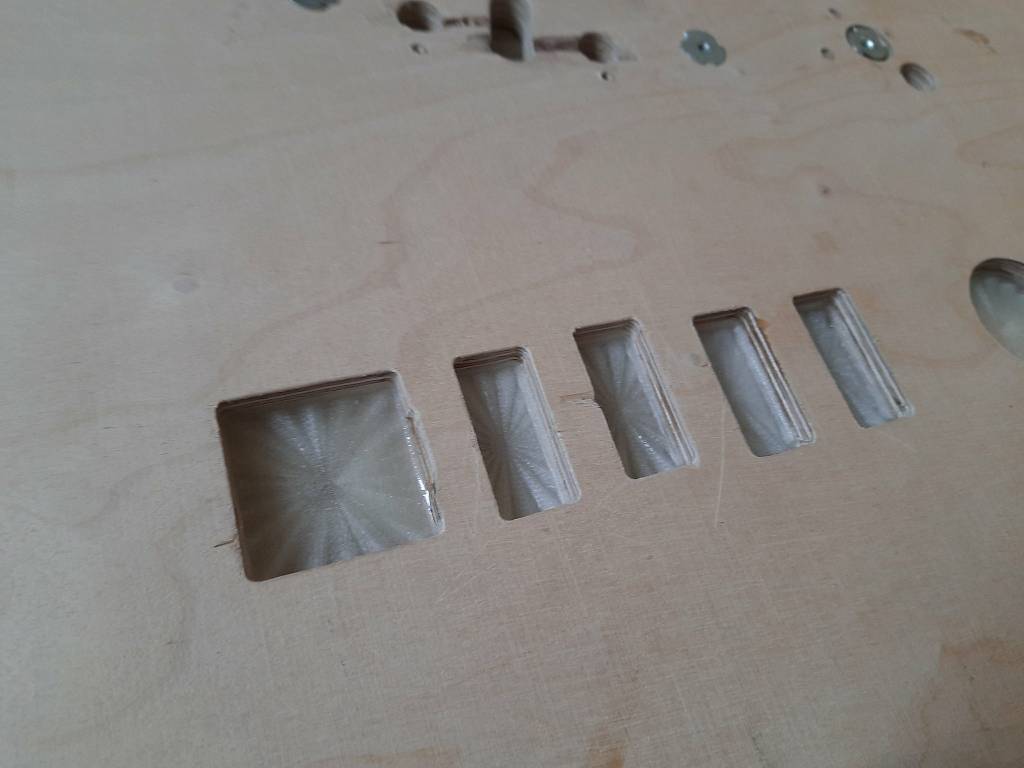 getting all the inserts in and starting with sanding 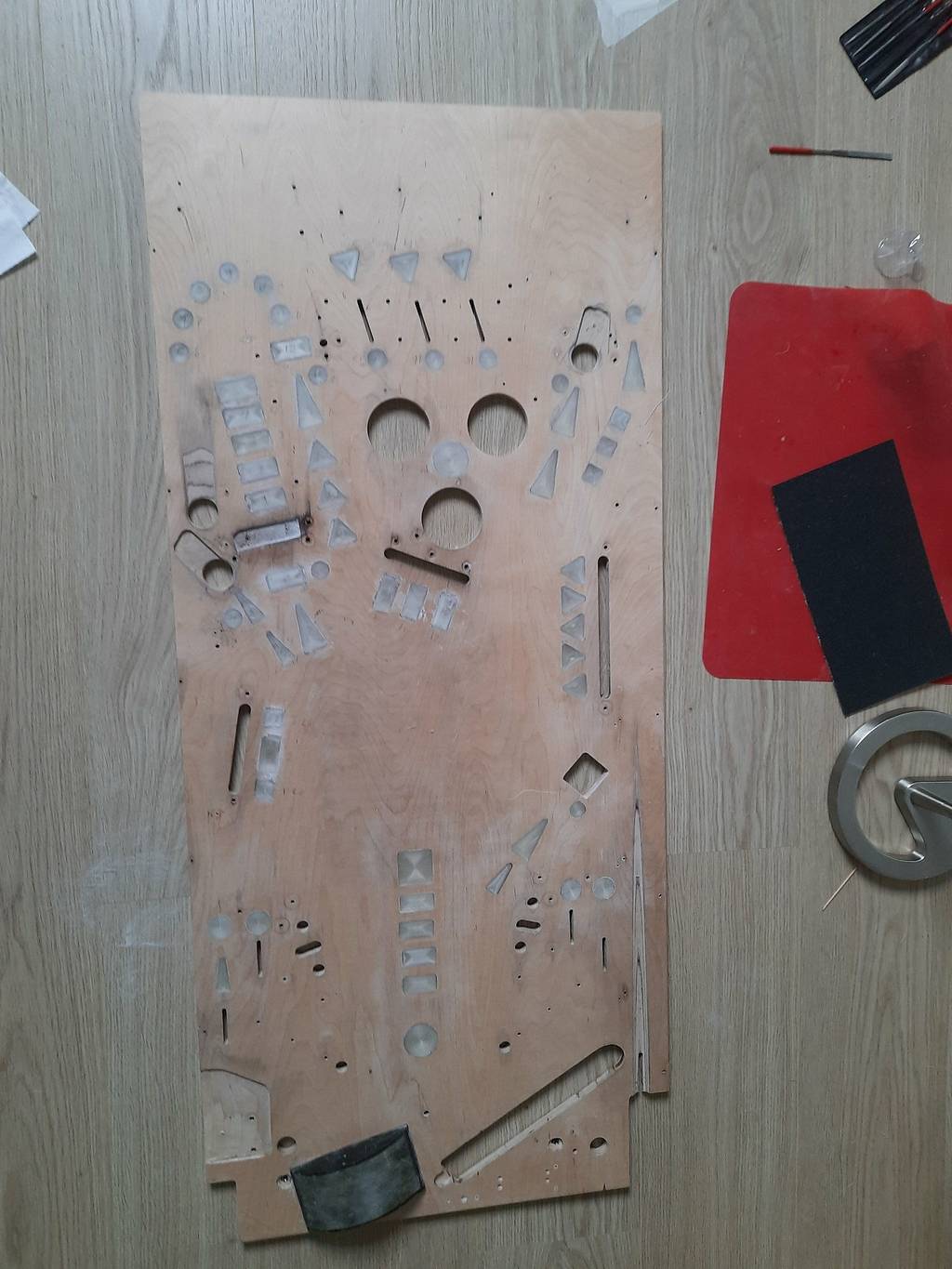 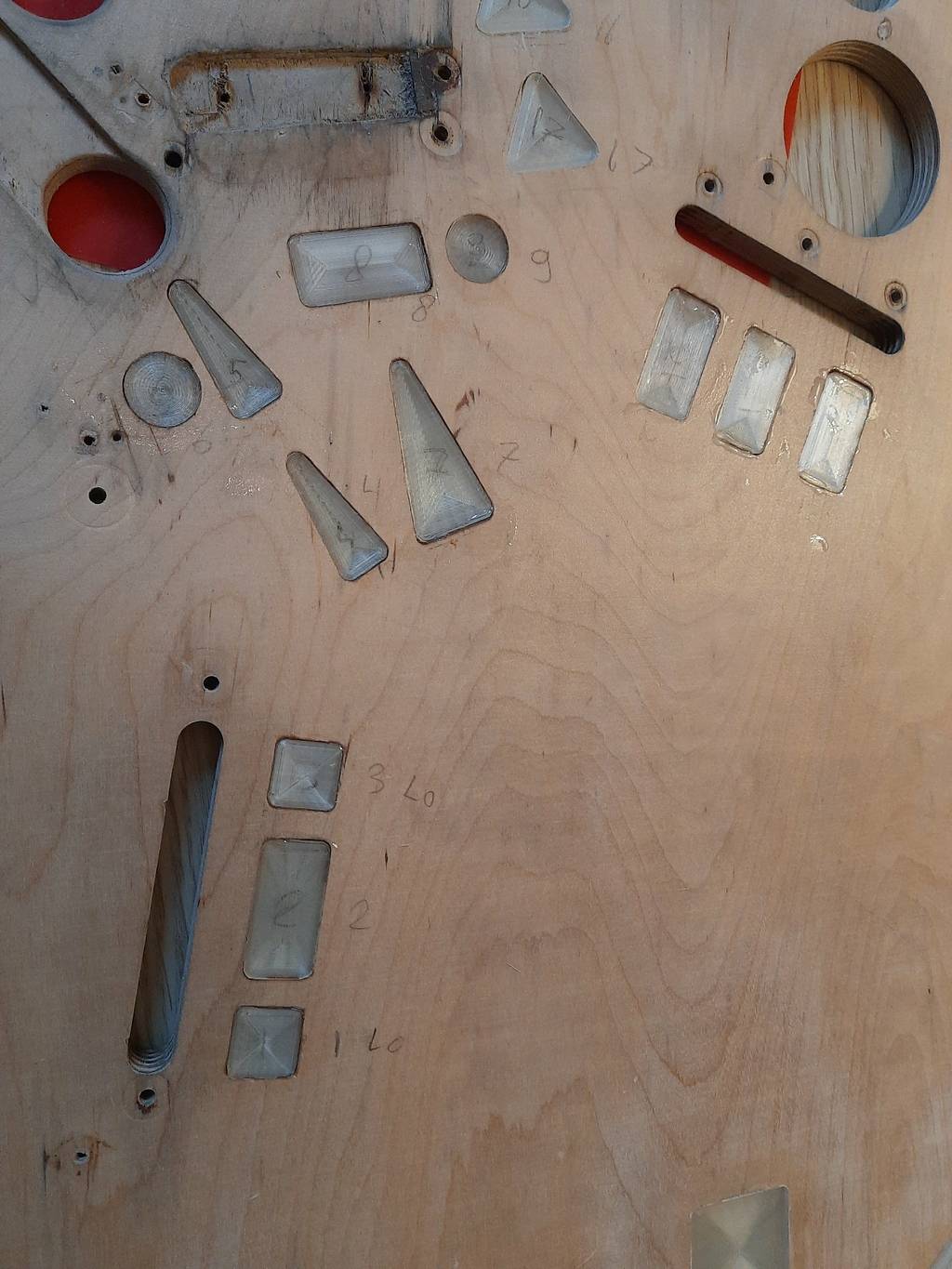 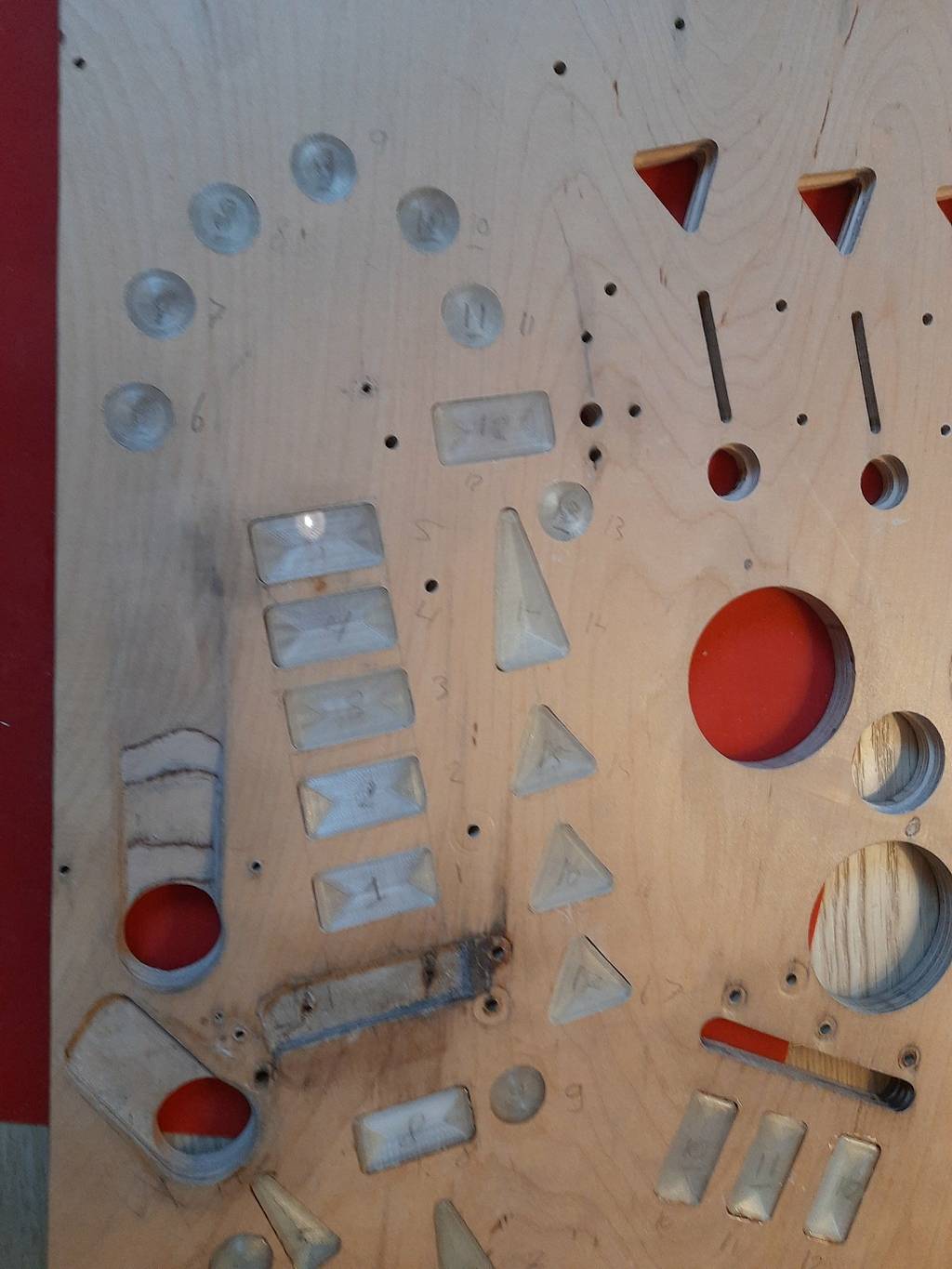 Almost ready sanding, the inserts are flush with the playfield, all large gaps filled.

now i just need to fill the last tiny gaps 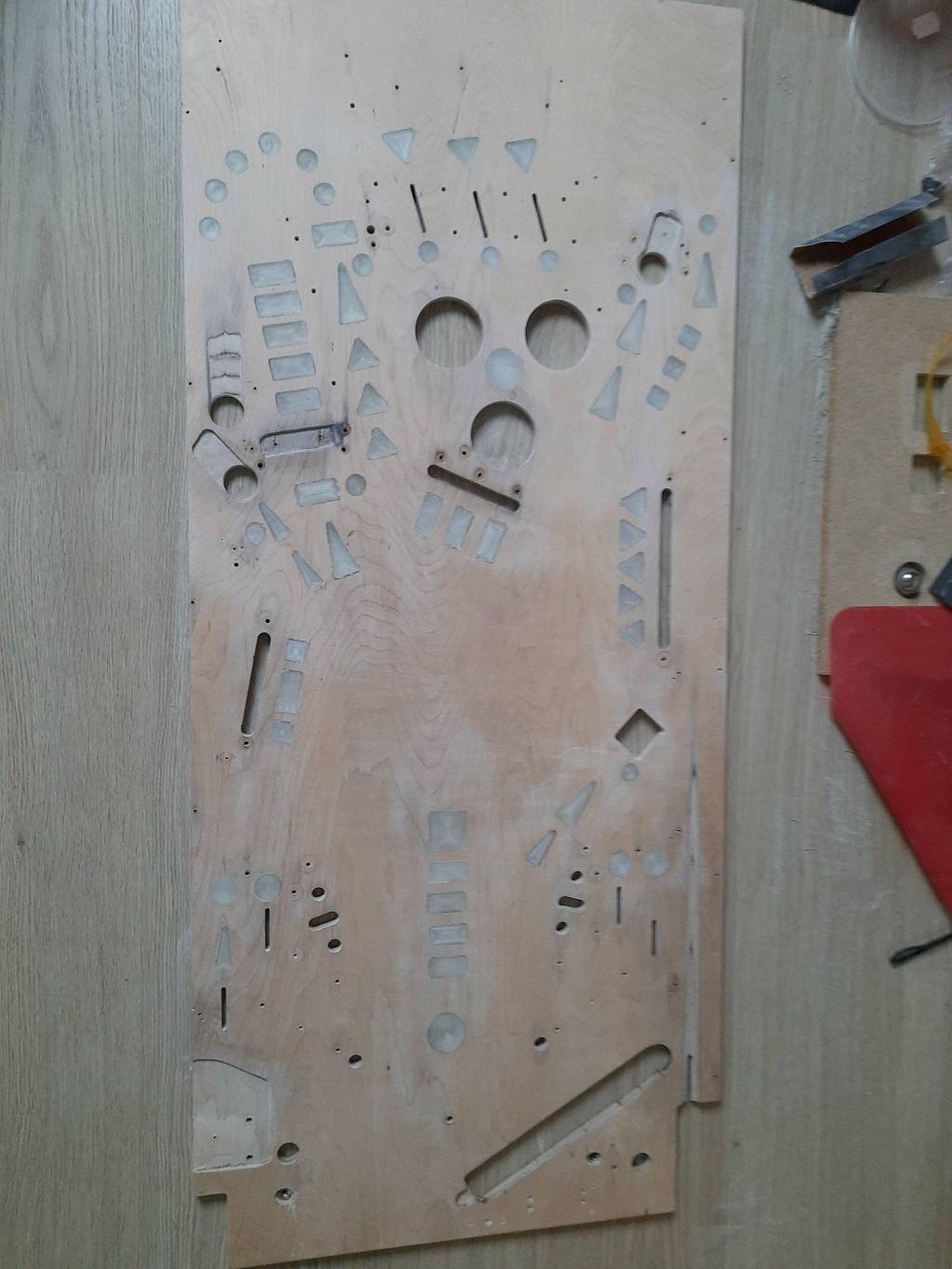 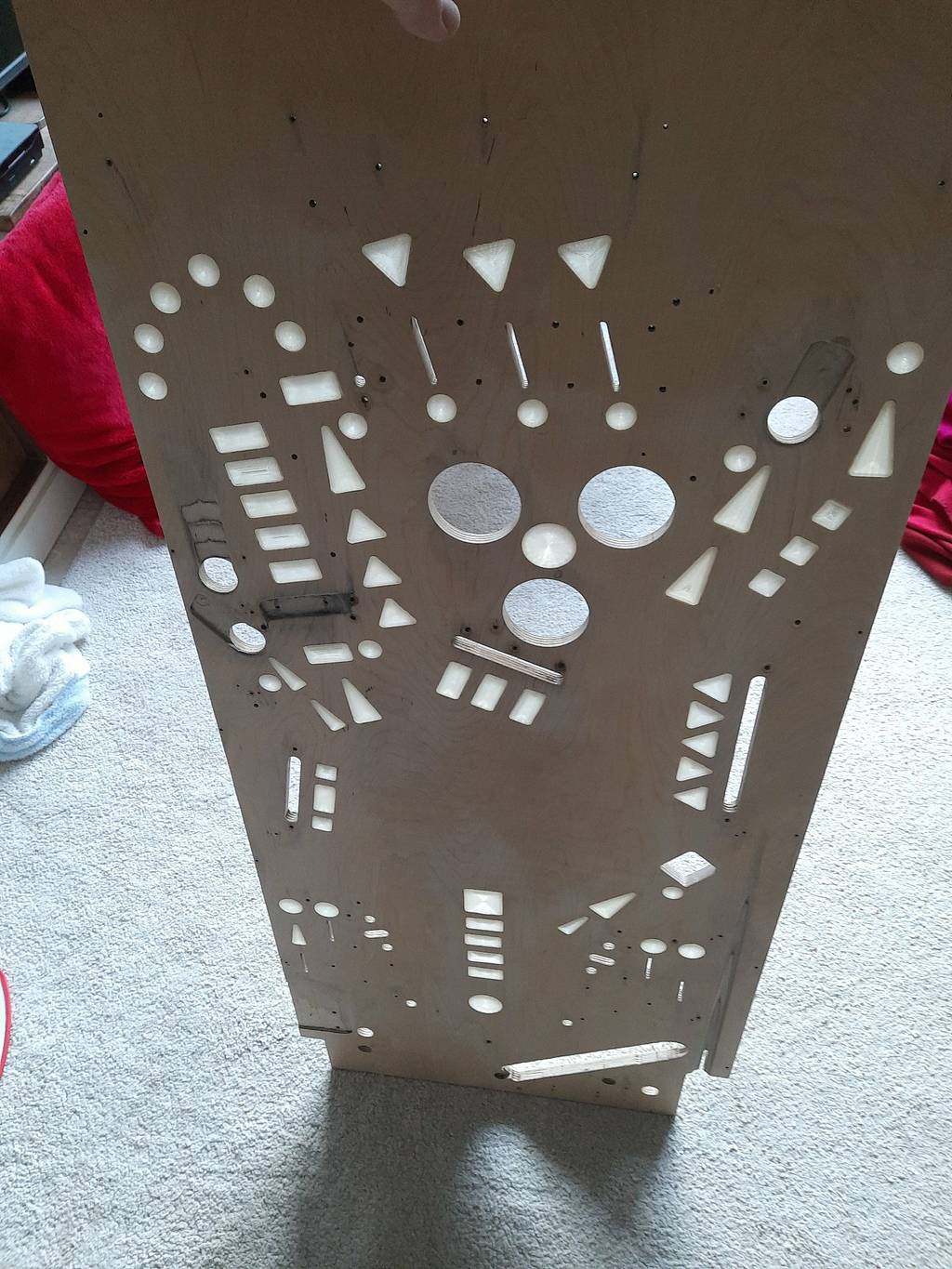 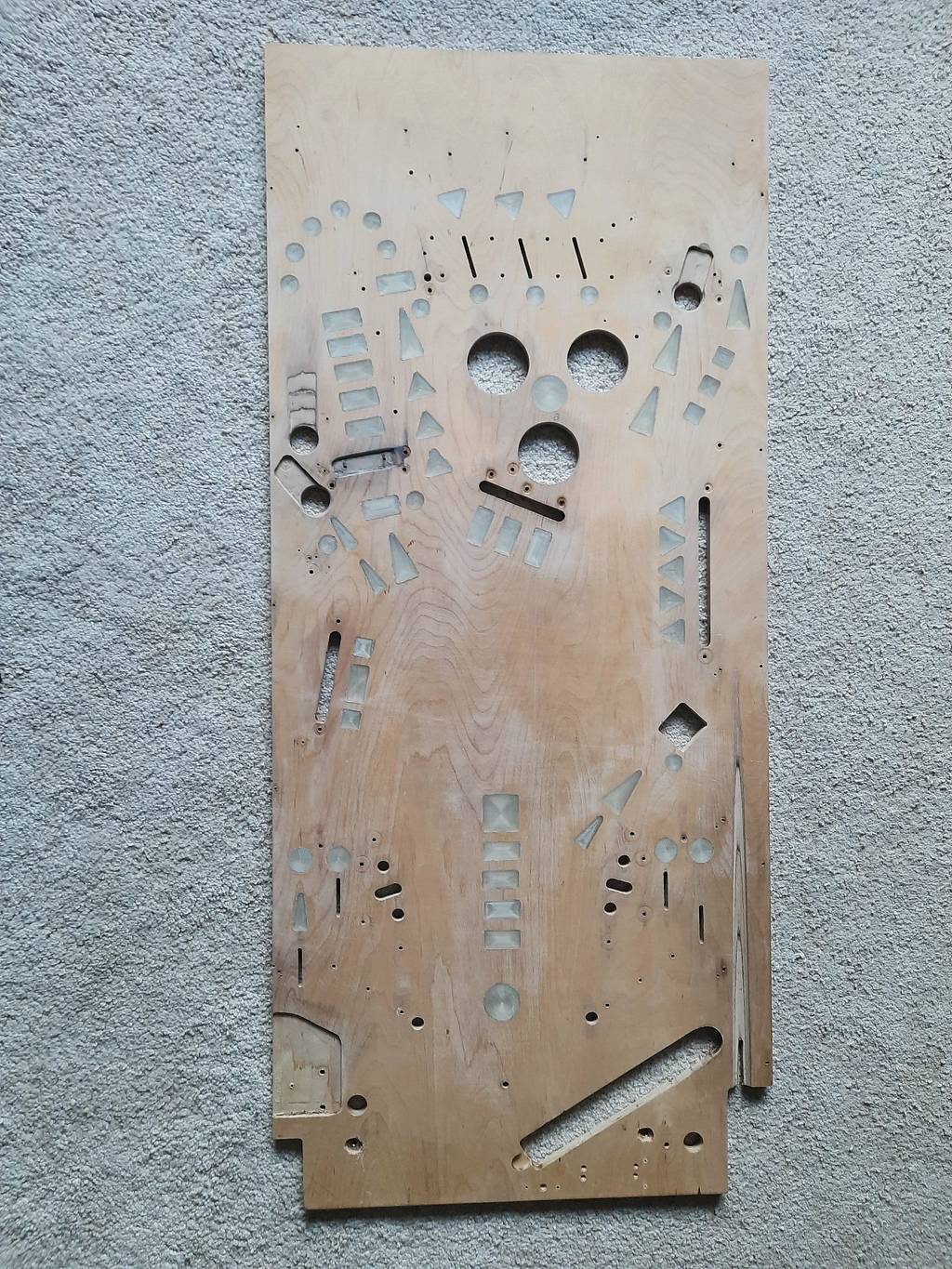 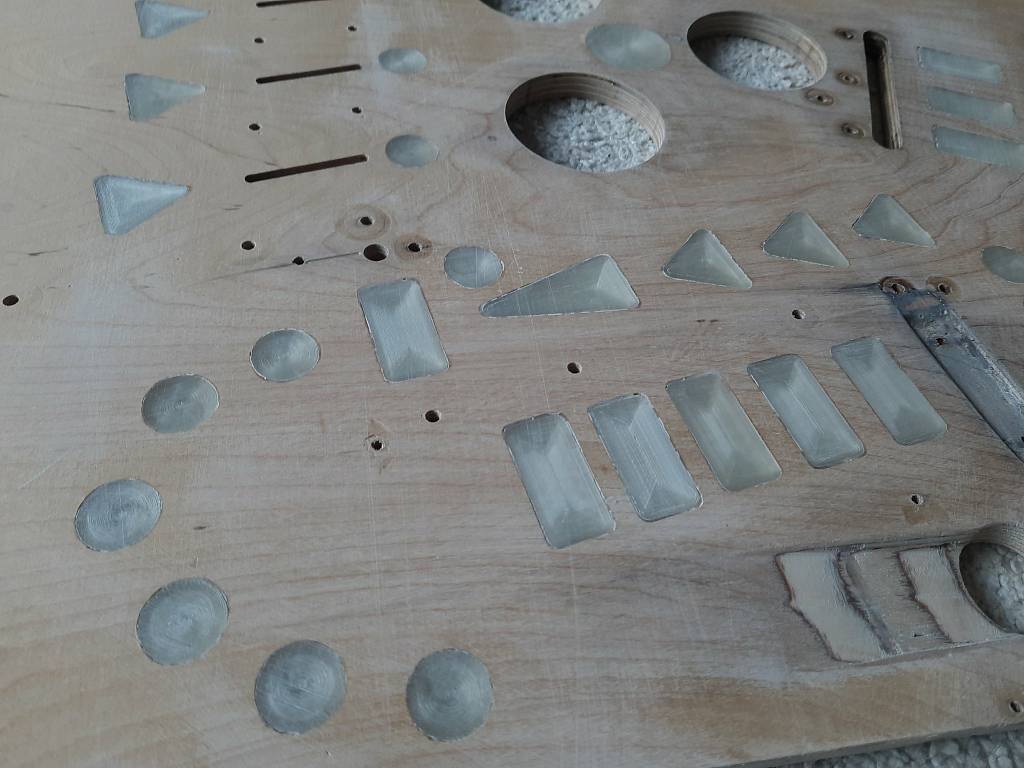 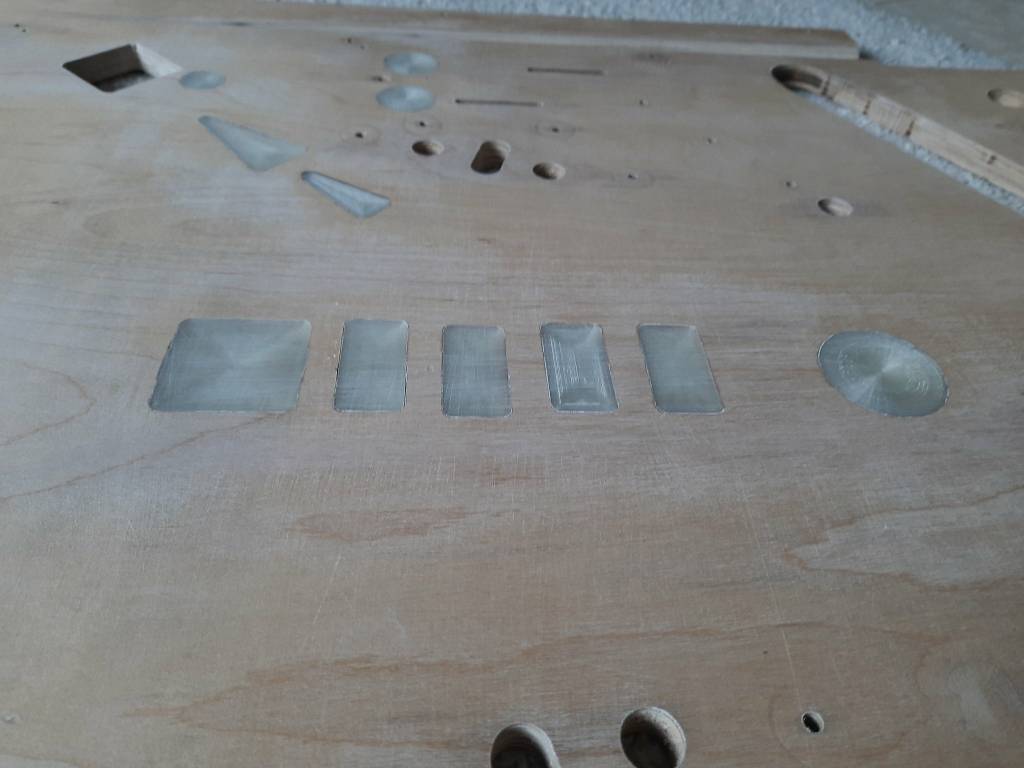 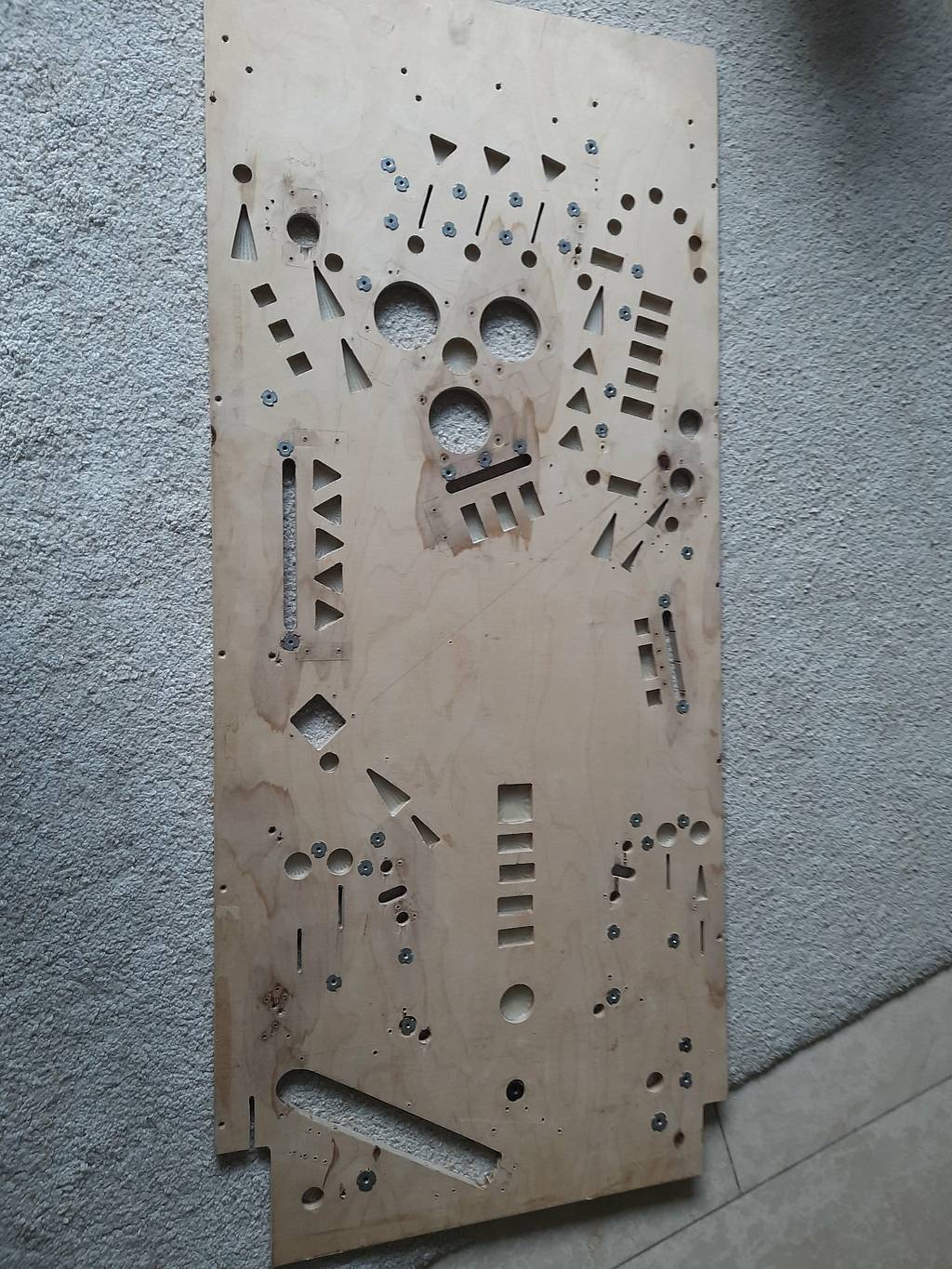 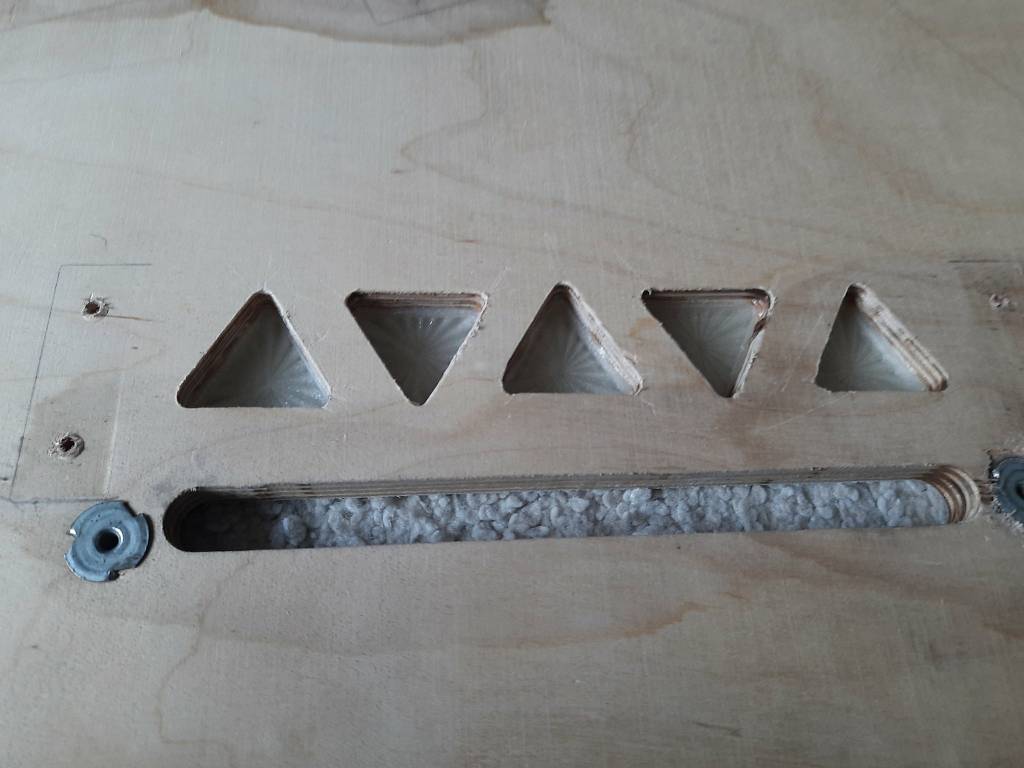 coated the front and the back twice, now back to assembly

the targets on the left are being replaced with droptargets 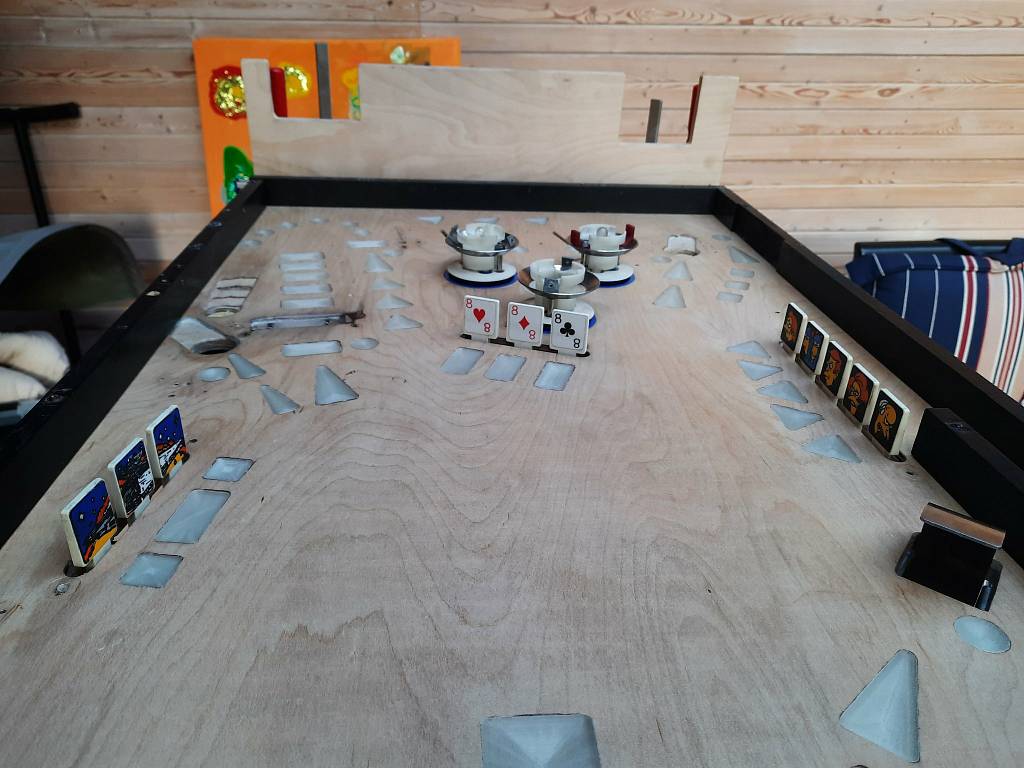 assembled the subway and scoop. i had to modify the assemblies a bit so they would fit.
the subway goes under the playfield where some of the inserts are at, i'll have to make some changes to the subway later to make some room to fit the LED's there. and i also need to make a switch near the entrance to register the ball entering of that side.

it does all fit after some modifications, but next time i'd better keep a little more room for all the assemblies when designing

meesterpieter said:
it was time to disassemble and get ready for the next phase, getting all of the playfield holes in and start on getting the game elements in.

took everything off untill the bare wood, and i've been busy on making all the holes in the board with a router. i've made some slight changes , mostly to the popbumper layout and the target bank in front of it because i didn't like the original dynamic, so i've put those a little closer together and the target bank at a slightly different angle.

i know it would've been easier to sand the simpsons board but i really wanted to learn how to make my own board, since i'm hoping there will be more after this first version. i did make some slight errors while routing but nothing serious. also i didn't make the holes for the lighting yet since im not doing those (yet) and before i'm drilling all the holes for mounting all the parts and screws i'll first be checking fitment and how things work out with my changes.

making the shooter lane took a few tries with a normal straight milling jig, put some small blocks under it to give it a slight angle since the start is about 6mm lower then the end, and it came out pretty nice.

so next up is sanding the board to get some smoother edges, making some corrections to the small errors i made, and then fitting all the parts so i can start drilling some more holes 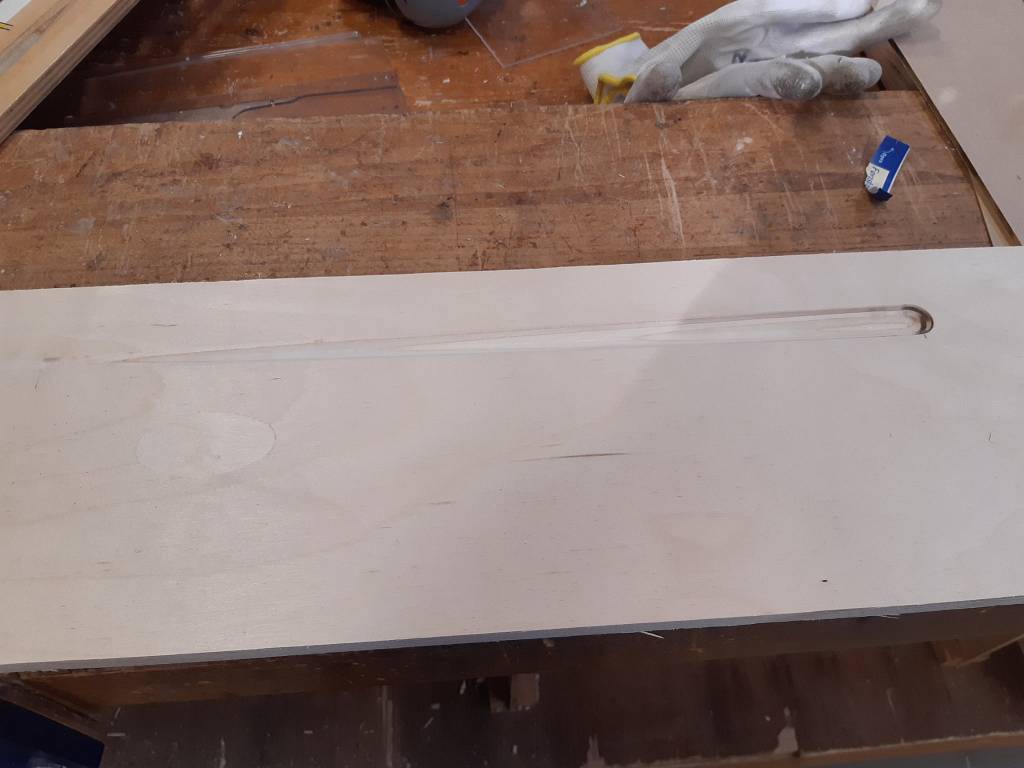 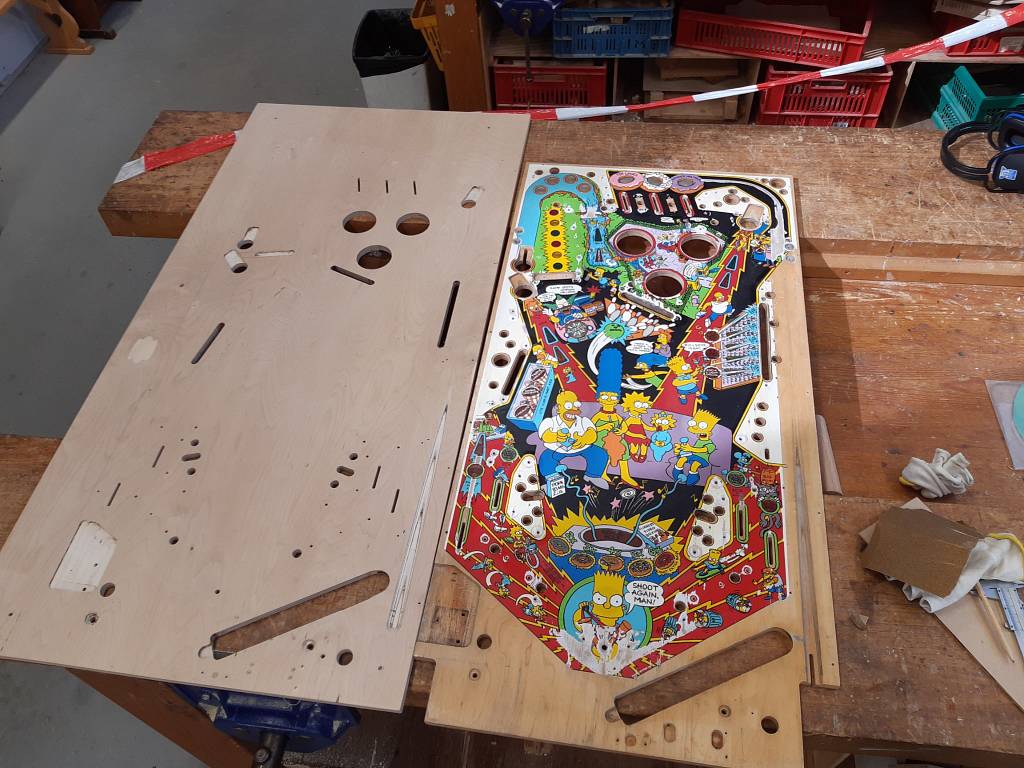 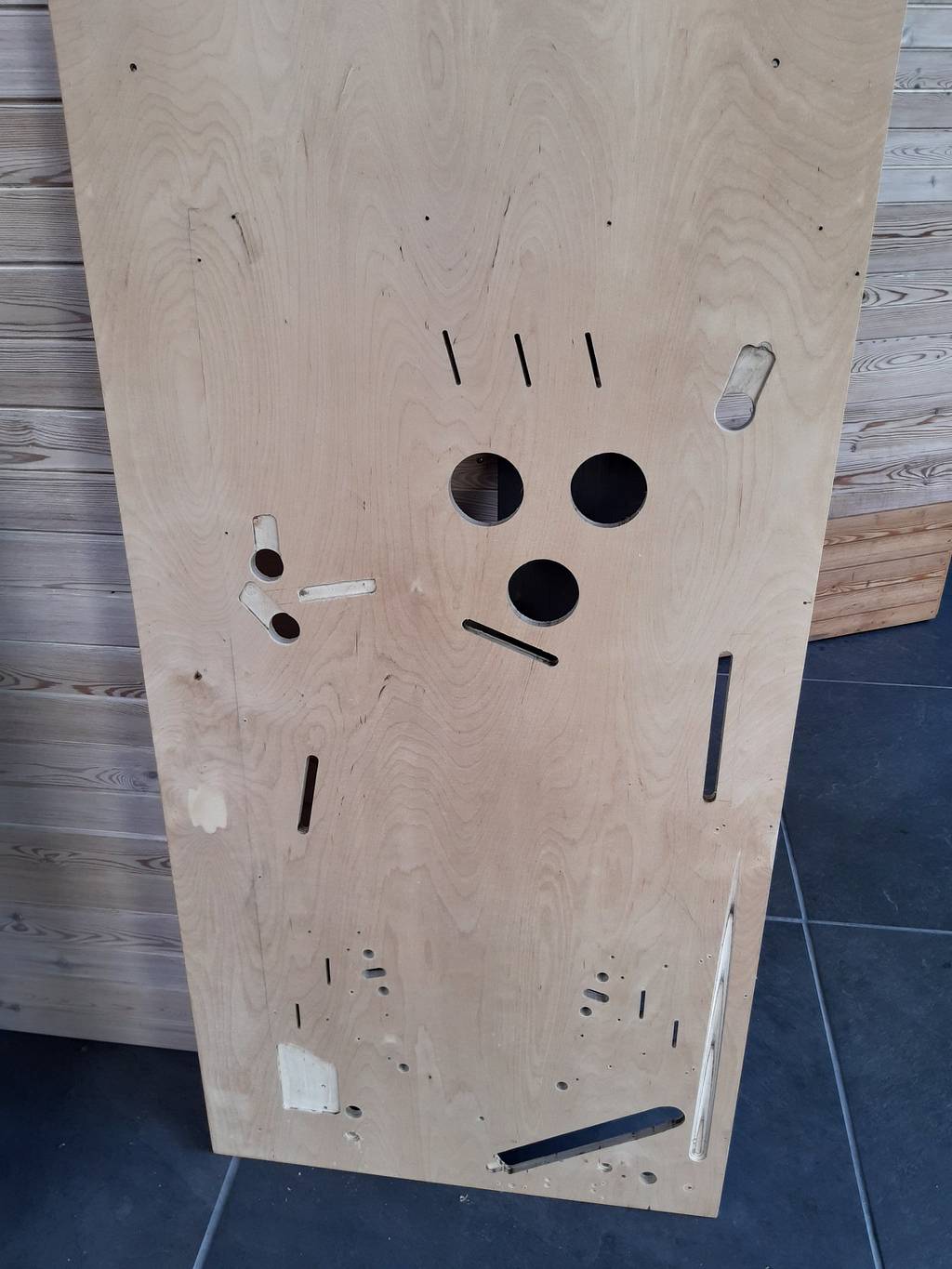 after that i've been busy mounting some ballguides and stuff, making it fit nicely looks easier than it actually is

also picked up a nice empty maverick cabinet to fit my project in, i'll need to source some more parts to make it complete but that'll come later 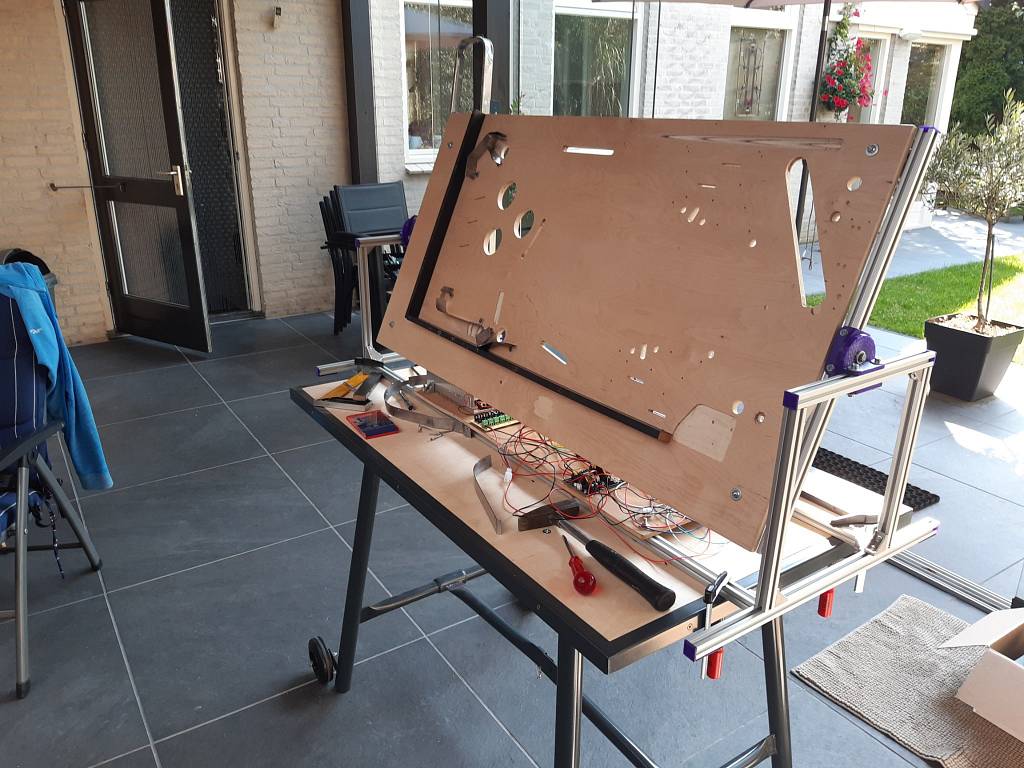 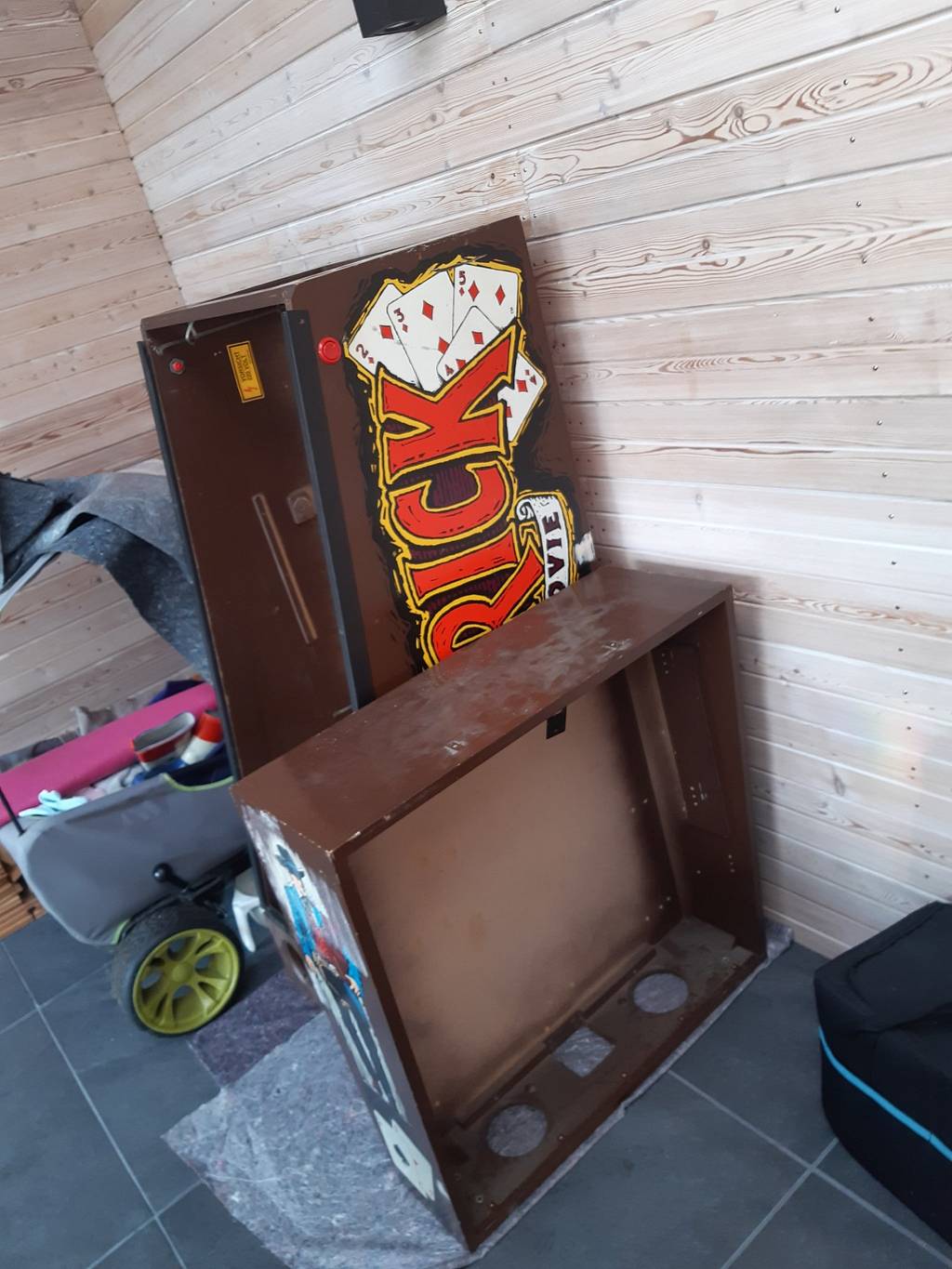 my cabinet didn't have hinges, and late data east / early sega hinges are apparently unobtanium, so ive made a cardboard model so i can cut make my own sometime. also repainted the rusty old coin door i already had, so i can use that on my cabinet 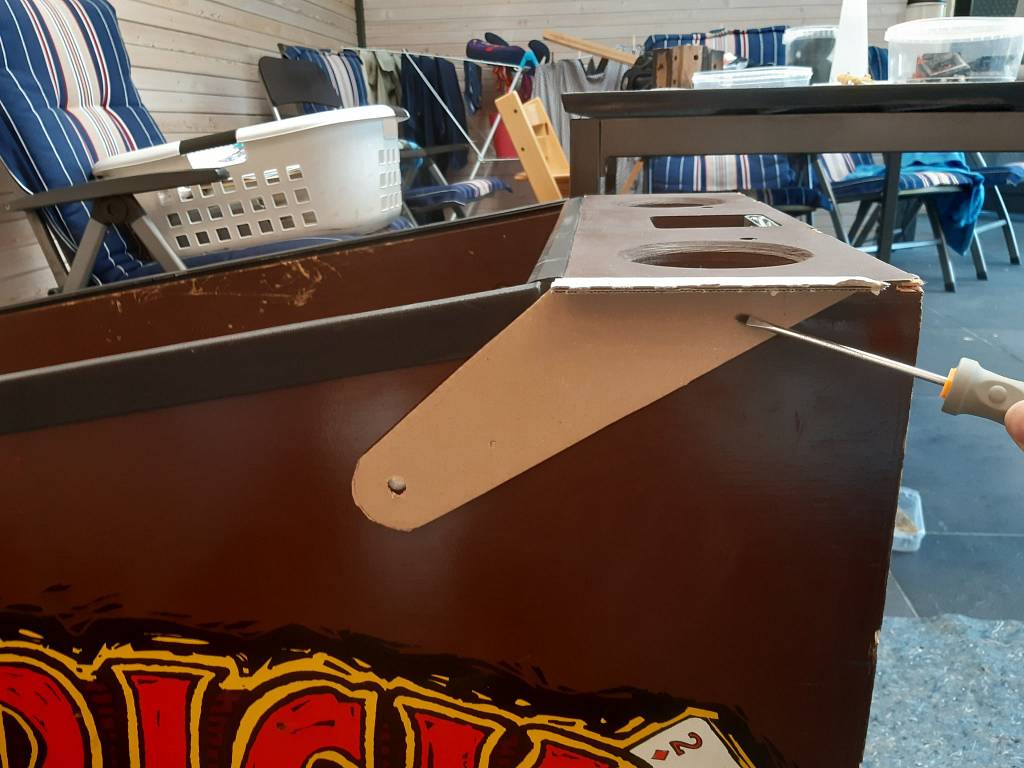 and been busy building up the playfield, i already regret some of the adjustments i've made to the popbumbers, because now i'll have to make all sort of changes to the mounting of the ramps, ballguides etc

also found out that sometimes the location of a part on top of the playfield doesnt have to be precise, but is has to be to fit it all right on the bottom

anyways, sometimes im thinking "why didn't i just sand off the simpsons playfield" and offcourse i still can, but i'm learning a lot and im not planning on this first playfield to be the final version for my game. 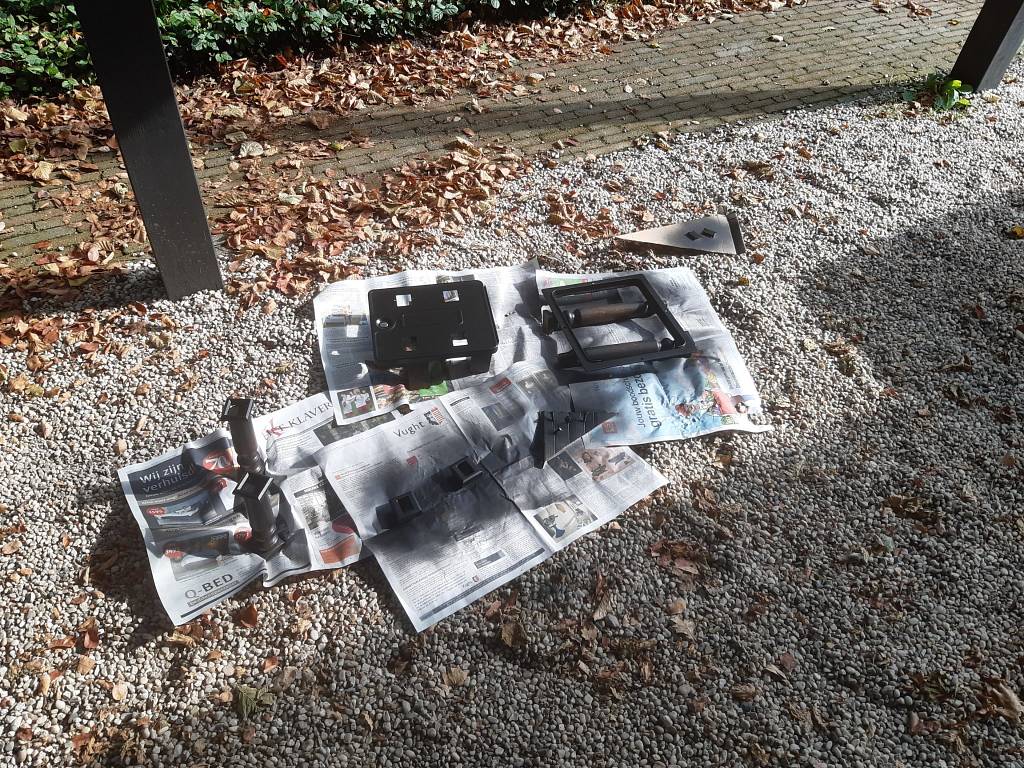 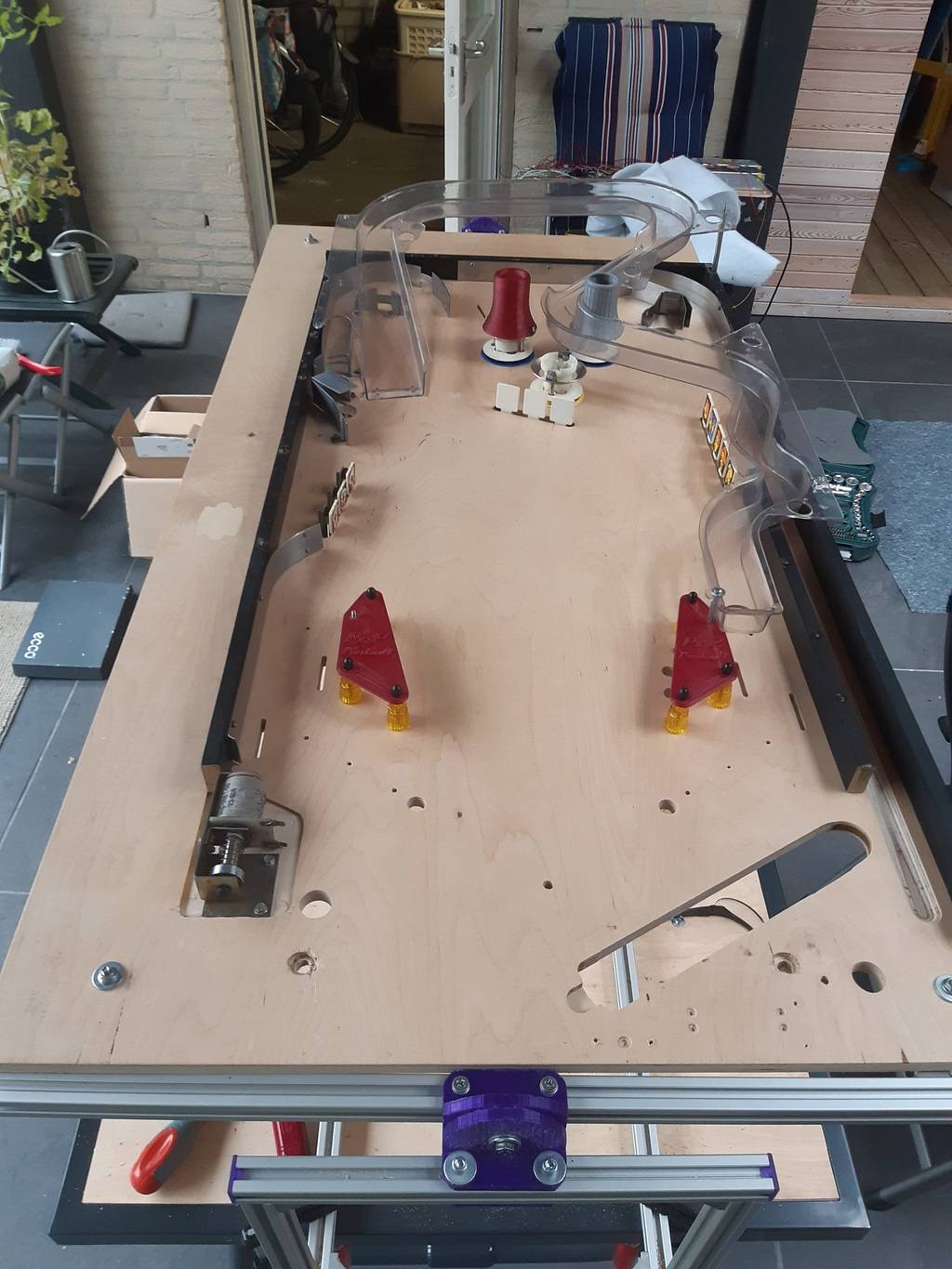 Great project. I have loads of parts from several baywatch I parted out years ago including hinges lock bar and mechanism side rails power switches and box transformer basically everything other than the wooden cabinets. The lock bar and side rails were newly powder coated too as I had a huge batch done at once and put these in at same time. Let me know what you need and I will get pics and prices. Also playfield parts too.

Asiapinball said:
Great project. I have loads of parts from several baywatch I parted out years ago including hinges lock bar and mechanism side rails power switches and box transformer basically everything other than the wooden cabinets. The lock bar and side rails were newly powder coated too as I had a huge batch done at once and put these in at same time. Let me know what you need and I will get pics and prices. Also playfield parts too.
Click to expand...

ooh sounds exciting. i’m after cab parts too if any left over please
A

AlanJ said:
ooh sounds exciting. i’m after cab parts too if any left over please
Click to expand...

Just PM me a list of what you need as there is plenty so no issue about waiting for stuff to be left over. I parted out 4x Baywatch and 3x Batman Forever when I lived in Malaysia. The cabinets had been eaten away by termites but everything else was good. It is easier to list what I don't have (i.e. just cabinets, MPU boards unless you want battery leakage damaged ones and I don't think I have any DMDs left as I sold them years ago and literally a bucket of playfield metal went AWOL in the move home). Surprisingly the playfields were OK too - clearly termites don't like hardwood ply.

I will also start a new thread rather than hijack this one.

Thanks for the offers, ill contact you for details
OP

almost everything back together

mounting a lot of new sensors, just need to make a sensor on my 3d printed subway and another 1 or 2 in the ballthrough.
dismantled the old arduino wiring so i can use that to connect my cobrapin controller

i have an autokicker but since i'll have to line that up with the plunger and also need to make some cuts in the playfield i'll leave that for now, maybe i'll add it later if i miss it.

next up adding the lights where i can, modyfying the subway so i can fit some lights above it and wiring up all switches