🏖️ Xianek's Sandbox... or the things I do, showcase, or strive for feedback.

Thanks, my grandchildren are here today. They now have some colouring in to do

Looks great. One of my favourite pins as a kid.
OP

Complete Remake. Fully redrawn from scratch.
Probably the highest quality remake ever made. Surpasses the original, yet it is near identical. V1B.

Example of work in progress...

Make your own Williams/Bally Serial Number or Warranty labels with these fillable PDFs:

Here we go... I've spent half a day and most of the night reverse engineering TBL (mostly software). I got it almost all figured out. I've decided not to publish some of my findings as it would make this platform vulnerable to hacking, and DP would have to do a lot of work on their end and ultimately change things. Changing things on their end isn't something I want them to do, because with the way things are right now, I am able to modify assets and other data and create an nice compatible update file.

The following songs have replaced the remakes used by TBL:

I've processed each file and I've hard limited them to -9dB as this is what I saw in the original files. This isn't the same as normalization. I think hard limiting was a better option in this case. I've created the intros and the loops as well.

I was able to install this update on my machine over 0.53 and it works.

The update is 788 MB, so it takes a while to update. This is normal. If you have ideas for other changes, let me know.

REMEMBER: Always backup, or clone your drive before making manufacturer unauthorized changes! You don't want to be breaking your machine while you're breaking copyright laws at the same time...

In case someone is wondering, this is an "elegant solution". You can switch between installed versions from the software menu in the game. To install this update, you do it exactly like any update from DP. And yes, that means you can switch between sound tracks this way as well. However, 0.69 is treated like 0.53 so, you'd have to switch to 0.51 for original sound track. In a few hours, or a day, or two, I will probably provide an even better update. Cheers! Xianek

PS. Are there any TBL owners out here?

Check out the Xianek's Club community on Discord - hang out with 27 other members and enjoy free voice and text chat.

I will be slowly moving my activity from Instagram, Facebook and Slack to Discord. There's nothing wrong with Slack and I will still use it in my company, but Discord is very similar... However, free version of Slack doesn't allow for much media storage and most of the pictures of my work that I've uploaded over the months are now gone. The reason I am moving away from Social Media is that Facebook and Instagram are also going to to be phased out due to their privacy policies. For example Apple plans on removing Facebook from their platform in the future OS releases because they are getting more strict on privacy and tracking. Besides, Social Media, doesn't really work for what I do. I can't advertise most of my work...
Last edited: Feb 7, 2021
OP

Free shipping on orders of 120 € or more, or 50% off on shipping for orders of 75 € or more. This offer is valid for everyone who joins me on Discord. Cheers!​

Welcome pinball enthusiasts from all over the world! If you've come to this website, the chances are you’re looking for something to improve your pinball machine.

Based on the original poster and studio materials.
All logos vectorized.
Multiple thermite explosions in the background and in the foreground.
Remastered faces of the actors.
Last edited: Mar 4, 2021
OP

A complete redraw from scratch. This one has a pink cadillac like the prototype. I can customize any aspect of this drawing, especially the colors, but unfortunately, I can't make a mirrored backglass yet as I am yet to find the proper technique to do this. This may also be Translite.

Hi, nice work! Do you mind if I ask what font you use in your 90's Bally serial numbers? When I click in the field my font isn't a match. I'll add it in Photoshop instead. Thanks in advance!

I don't mind. It benefits the community. The font is embedded in the PDF so it is possible to find out what it is anyway. The font I use is called "Chainprinter". Cheers!

These are my versions of the Mandalorian Banner for Stern. It can be customized with additional artwork / assets from the game. I can apply Stern logo as well. The size of the banner is 85 x 200 cm. I am making this available as a roll up with a stand or as a banner.

Welcome pinball enthusiasts from all over the world! If you've come to this website, the chances are you’re looking for something to improve your pinball machine.

A new product is coming soon: Pinball Playfield Glass covers. I will share the photos and details soon. Prices will start at 45 €.

Here’s a final candidate for Fish Tales Alternate Translite (V1C). This is an original drawing, intentionally kept in a cartoon style as most of the assets on the game are. The original Translite drawn by Pat McMahon, while beloved by many, didn’t match the style of the artwork used throughout the machine, i.e. decals, plastics, playfield. I’ve decided to make a new one mainly for my own satisfaction. I’ve collaborated with a skilled illustrator on this project. It was a big challenge as many drawing styles were used on the machine, and something “in between” had to be settled on. I believe that my version uses the “correct” logo and some of the elements of the original drawing done for the prototype game by Python Angelo, such as the diver and algae eater to name a couple. In the end Python didn’t do the artwork for this game. The original artwork in the game is factually incorrect, just like this version, as it set on what seems to be a lake, but features fish found in the ocean. Oh, well. Technically this is going to be an excellent Backglass with an extravaganza of colors.

I am working on an alternate Translite for The Shadow. Here's an initial draft that I can share. Let me guys know what you think. Is this the right direction? Should I change the background? The drawing of The Shadow was taken from the cover of the comic book, but modified. If you'd like to participate and help finish this work, please share your comments here, or better yet, please log into my Discord server.

There are some special effects included which can only be seen on real product.
OP

Speaker Panel with blockout paint layer on the back. It is possible to illuminate "Bally".
OP

Here are some real pictures of how Deadpool came out on tempered glass.

Rick and Morty is almost ready and will come with a few special effects... A semi-translucent edge around the title and stars in the sky that twinkle depending on the viewing angle. You can find this and many more projects on my Discord which you can access via my website. Or just Google Xianek... As a side note... Since Brexit I had the very little "going on here"... Is everything all right?

High quality Backglass (translite will be ready soon) for Spooky Pinball's Rick and Morty machine. The main feature is a colorful drawing of Rick and Morty in action. The title "Rick and Morty" has semi-transparent edge of the yellow glow, which makes it glow depending on the viewing angle. There are twinkling stars in the sky visible when the translite is illuminated, as well as black [adult swim] logo in the upper right.

Here's an alternate Space Jam Translite. The image of Bugs Bunny and M. Jordan comes from a stock photo used on the CD cover which I've purchased. I've removed the original logo and replaced it with a complete high quality remake. I've added SEGA logo. Some of the stars in the background will twinkle depending on the viewing angle. I have also added some clouds in the bottom part of the picture to get rid of the empty space.

I've tried to keep the colors just like in the original translite, but I put emphasis on symmetry given that the topper of the machine is a fan mounted in the middle. The tornado is asymmetrical indicating chaos. I've composed the car from the film into the whole composition. I might try a few variations, but I am pretty happy with the result so far.

I've got a lot of stuff made for the Godzilla, and it's all based on Stern's original assets.

LE+ Backglass (or a Translite) with some twinkling stars and somewhat translucent red edge of the title: 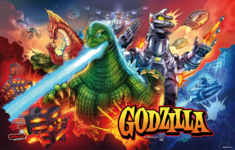 Pro+ Backglass (or a Translite) with some twinkling stars:

Side Blades (either Plastic PET G or Laminated Decals):

Everything here is not made from any scans. It is all made from original digital assets from Stern. Everything surpasses Stern's quality. In fact, it's probably the best on the market (or at least I want it to be that way).