In Progress Bally Gold Ball - Another wreck - with hacks

Some progress today : the tip102’s are holding up. not blowing like the crappy 6045g’s i bought

this project is problem after problem:

these two coils that open and close the gold ball gate are not correct. they are too long. the gate closes but can never open again. so i’ve ordered the correct shorter coils.

then i discover this with the ball kicker:

even though i’ve put in the correct spec coil, it doesn’t kick the ball out. after checking in the manual i realise this is the wrong ball out hole assembly. ffs. what a botch job someone did on this poor pin! so the hunt now on for the correct part..........
OP

i did manage though to make a wire link to open and close the gold ball gate, and it works well

what's the correct part?,do you have a picture?,then I can check my spares for you
OP

stevebm1 said:
what's the correct part?,do you have a picture?,then I can check my spares for you
Click to expand...

that's the same part used on VECTOR,ELEKTRA and FIREBALL 2 I believe,Not sure if I have a spare one of those,but I will check for you
OP

yes it is the same part
OP

Another early start today on this project. First job is to look at the hidden 'gold ball' trough. There is a microswitch that is supposed to detect when the 'gold' pinball is in its trough. This switch has been disconnected and bent out of the way. I rewired it back in and reworked the wire to make it effective again.

In testing I couldn't get it to work, then I discovered that the actual switch itself is faulty. the NC part of the switch works fine but the bit I need, the NO switch circuit doesn't work! Faulty switch. I spent an hour this morning trying to find a replacement part, then I had a brainwave and looked at the coin door - sure enough same switch on the 3 coins slots. So I swapped one of those over and it now works perfectly. When the machine decides to pop out the 'gold' pinball, it now does and when the ball drains, it correctly registers the 'end of ball'.

Next job is to look at the sound card - it is not working at all, not even the slightest hiss from the speaker!
OP

astyy said:
Million dollar question, is the Gold pinball in its trough

It is now - I bought a gold one and also a copper one - quite like the copper one to be honest! But don't fancy re-theming this to "Copper Ball" ;-) 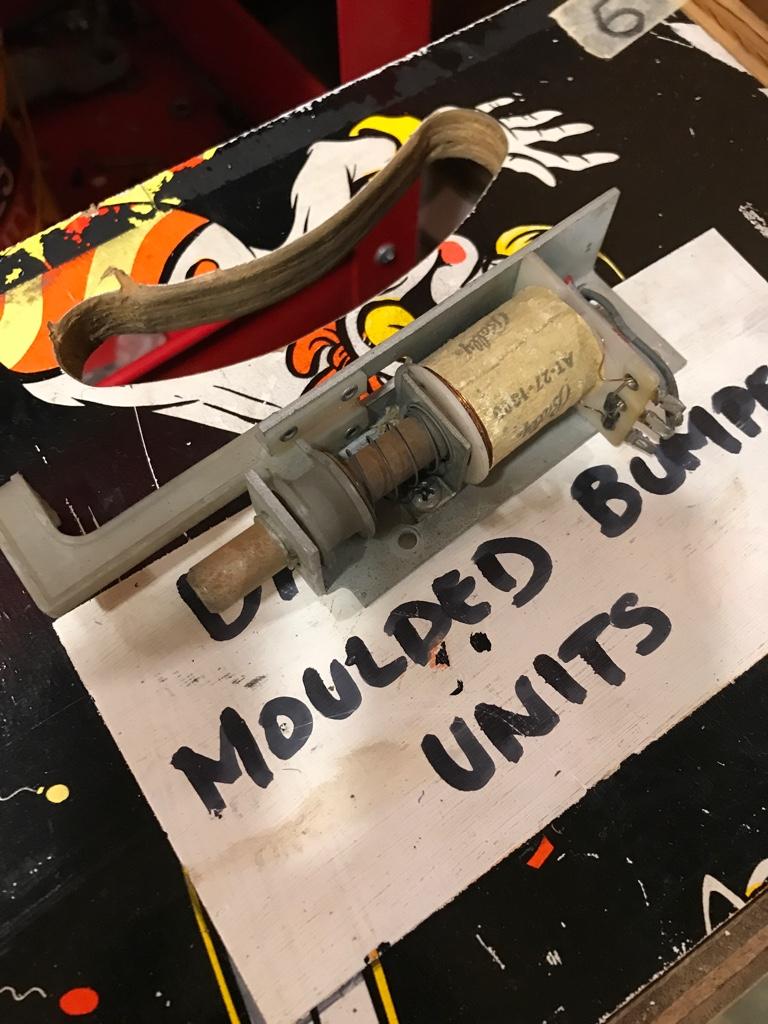 Free with any order. Or £5 posted.
OP

Sound card was an easy fix - just replaced the 1K volume control pot and it's working nicely. I do like a nice easy fix like that!
OP

Here is the microswitch - same type used on the gold ball trough and the coin door coin mechs. Omron make.

glad Andy had a spare kickout mech for you,I did check my spares,but sadly did not have one
OP

stevebm1 said:
glad Andy had a spare kickout mech for you,I did check my spares,but sadly did not have one
Click to expand...

Thanks to @pinballmania for the correct ball eject assembly. here it is fitted :

worked first time, and ejects the ball consistently.
Here was the one i removed, completely wrong unit!

Next was a similar issue with the coils that close and open the goldball gate. here it is with the incorrect coils, too long:

I have fitted the correct coils:

Now they both correctly pull on the plunger when energised, Need a double length coil liner sleeve really but it’s holding and working as is. the new coils have really tight sleeves. can’t even get them out.

Next ive done some repairs to the mpu board and got a multi rom daughter board to try. hoping it boots

machine working yey! that’s with an alltek mpu board in. played a few games and even got the gold ball to appear. really cool

original mpu board still needs some work. tomorrow’s job. plan on getting up very early before i have to be dad taxi for the kids.
OP

Early start this morning to work on the MPU board, had it on the bench and wired it into power and went through methodically testing various points. 3 hrs later I have a working board! Yes.

Now got a fully working goldball. A couple of score displays were out and the gold ball outhole switch needed adjusting, plus a load of bulbs to sort out.

Cosmetically it looks awful, faded cab and big chunk of paint artwork missing off the backglass, but I'm going to have a few games today and see if I can get that elusive 'gold ball' to appear.

Well found another issue. system was not saving high score and other volatile ram settings. there was a rechargeable battery on the board looked ok and tested ok but i cut it off and replaced with a 5.5v super capacitor.

a few tests and i realised it wasn’t charging. the earth connection on the mpu board was faulty so sorted that. super c not charging, but surprisingly still no memory save?

decided to replace the u7 ram with one from another board and tgat was the issue. faulty chip. now working perfectly!

I’ve played a fair few games. like it. simple rules but got the bally ss feel.

Took a look at the backglass and it’s flaking badly. decided to print a coloured piece of paper and stick over just to a) hold the flaking stuff in place and b) make it look slightly better:

i did say slightly!

I was in two minds about whether to keep this or not. decided it’s worth some more love. so what to do with the horribly faded cab:

I’ve decided I will try hand cutting some stencils, and then repaint the faded pink background. I’m not sure i can stand a pink coloured pin though, so thinking I’ll go red instead. It’s going to be long job!

if you think that pink is bad,you should try owning a Phoenix!
OP

Got some stencils made from @ChrisFormela , so it's on with the cab refurb

The raspberry pink has faded very badly as you can see above!
C

You'll be ejected from the faded Gold Ball owners club

Seriously, the original base colour revealed under the side rails is really interesting and not as larey pink as I was expecting. Do you intend closely matching it?
OP

Seriously, the original base colour revealed under the side rails is really interesting and not as larey pink as I was expecting. Do you intend closely matching it?
Click to expand...

yes it’s in places a raspberry colour and in others more a strawberry colour, so going close to either of those.
OP

Filling in the missing plywood. quite a chunk off the rear corner

This style of backbox has T-Moulding. The old black is faded and cracked. I’m thinking of swapping to a bright Gold one instead, given the game is Gold Ball.
OP

Ps I’ve moved away from ronseal 2 part filler to a much smoother 2-part car body filler. it seems to work much better and sands smoother
C

I strongly recommend to use epoxy resin (with added thickening powder) on all corners and edges, specially legs area. Filler is a bit too fragile. Unfortunately, it's not the easiest thing to be applied.

God a real nasty paint reaction today. the gold bubbled up all over the place. grrrrrr