'tis the season for reducing prices so will lower this to £3,600. So that's a complete fully working Gottlieb Stargate plus everything you need to swap it over to a fully working Big Hurt whenever the mood takes you. That's less than the price of a typical single WMS game!

I must start this advert by stressing that no cabs were broken up to free up the second playfield. The playfield had already left its original home when I had the opportunity to acquire it. I therefore consider this a playfield saved rather than a cab destroyed. An important distinction.

For sale here is a fairly unique opportunity to own 2 complete games (Stargate and Big Hurt) which can be swapped over using the same cab. This means you get 2 playfields, 2 backglasses, 2 backbox lamp boards, 2 sets of ROMs, 2 speaker/display covers and 2 sets of speaker grills. The cab is from Stargate which, serendipitously, is the better artwork of the two. Given you can’t see the cab art when you’re playing the game, this means regardless of which game you’re playing, you are essentially seeing the same as you would if you had the games in their original cabs.

I’ve made the swapping over of the 2 games as simple as possible (see attached step by step instructions). It isn’t as easy as swapping a Pinball 2K playfield, but I still think it’s reasonably straightforward.

When I started this project, I expected Big Hurt to be a game I only played a little bit with Stargate spending more time in the cab. Big Hurt turned out to be a really fun game though with some nice shots and the glove toy is absolutely brilliant. I would say it easily spends the same amount of time in the cab as Stargate. I know nothing about baseball, but the theme seems to integrate with pinball really well. As this is coming from the seller you may wish to take this with a pinch of salt of course, but I genuinely don’t know anyone who’s played it who didn’t enjoy it.

General: Both games fully stripped down, cleaned and rebuilt with new rubbers. They will each have had maybe 100 games since then so still in great shape. All (6) flipper mechs fully rebuilt on both games and new flipper bats – all shots can be made easily. All mechs, motors, switches and lamps work as they should. New decals fitted to all targets and protected with mylar.
Big Hurt: A very nice playfield with relatively little wear. Probably as good as you’ll see on an operated Gottlieb. Glove motor is new (as it was missing). The glove itself is also new.
Stargate: Probably about average for an operated Gottlieb – I’ve certainly seen a lot worse. Some wear areas have been covered up with an overlay and protected with mylar (notably the kickback area and the entry to the pyramid). New ramp decals fitted on the 2 metal ramps and protected with mylar. New plastic ramp fitted.

Both backglasses consist of new translites complete with the glass, lift channel and side trim so it’s very easy to swap them over.

The Backbox Lamp Boards
Stargate: Fully working including the circular rope light that looks great lit up in the dark.
Big Hurt: Had to convert this from a Tee’d Off. This required moving 2 of the flashers, adding a new aux driver board and re-wiring. Slightly more effort than I was anticipating but worth it to get the correct effect from the backbox when playing the game.

The Speaker/Display Cover and Speaker Grills
Stargate: All original so some wear and tear but look reasonable
Big Hurt: All NOS so in very good condition

Display and Boards: DMD is very nice – bright with no missing dots. All boards are in great shape. Driver board is of particular note as it’s all original. Not something you see often on Gottlieb System 3s! Backup battery on CPU has been recently replaced. The previous one lasted over 25 years so this one should be good for a while!

The Cab: A reasonable cab for its age. Usual scuffs/scratches and some touch ups but still looks pretty good to me. The only modification to the cab is the addition of a double leaf switch and associated wiring to support Big Hurt’s upper left flipper (Stargate has an upper right flipper). Gottlieb has standard wiring in this regard so all I had to do was populate the missing upper left flipper connection in the cab / playfield connector. This makes it plug ‘n’ play without any modification to the playfields. Replacement coin door fitted as the original had been drilled. It’s a German one from an older game but looks pretty nice.

All of the spare items can be stored under the cab (see step by step instructions) so if you haven’t got a lot of space, this is an opportunity to have 2 machines in the footprint of one machine.

For transportation I’ve made a custom crate (see step by step instructions) that holds all the spare items (playfield, backglass, lamp boards etc.) as well as common items legs, bolts, balls, cab/leg protectors, etc.)
It has a footprint of 495mm x 555mm and is 1.25m tall so takes up less space than a cab. It’s easy to move around with a sack truck. The sides are open in the picture (so you can see inside) but this will be sealed in pallet wrap for shipping.

Located in Pudsey, West Yorkshire. Easy access if you want to arrange a courier or buyer can collect. 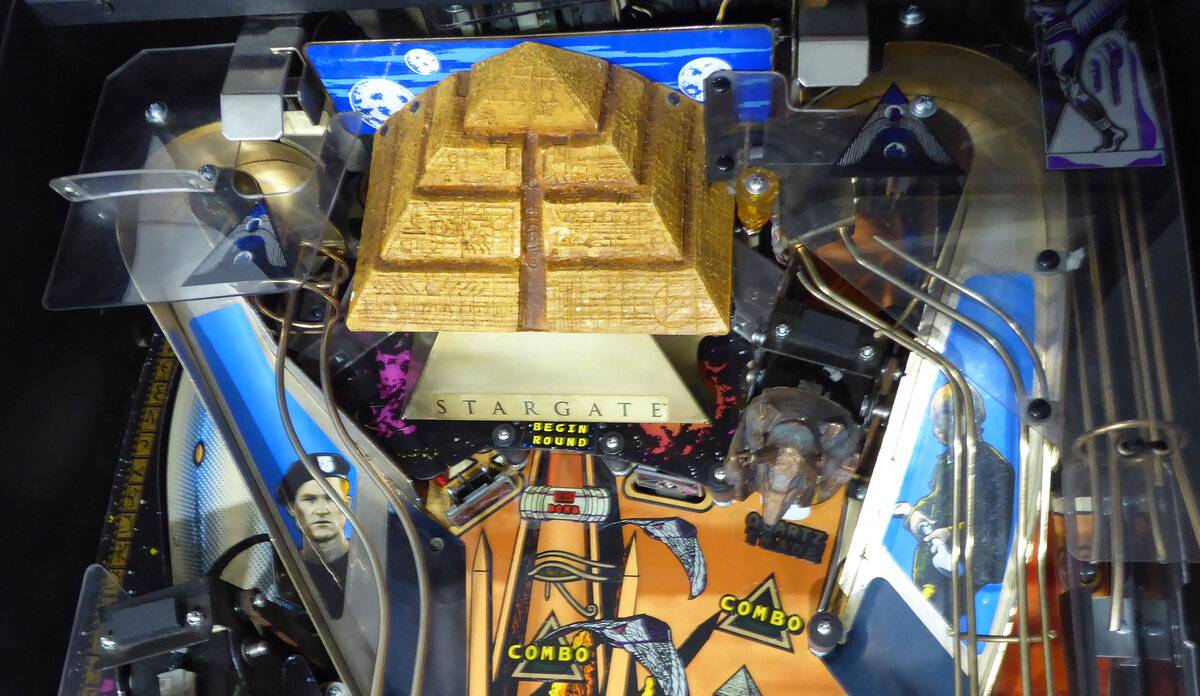 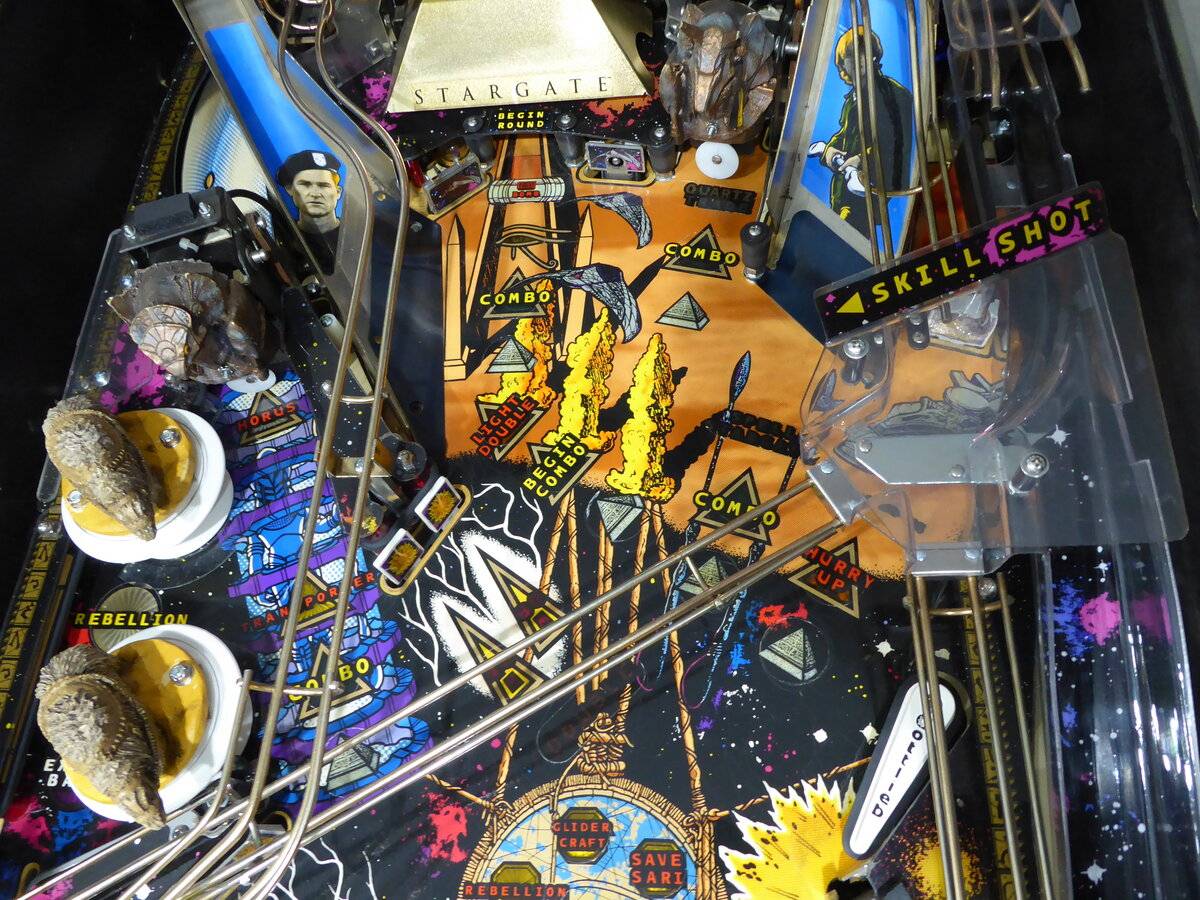 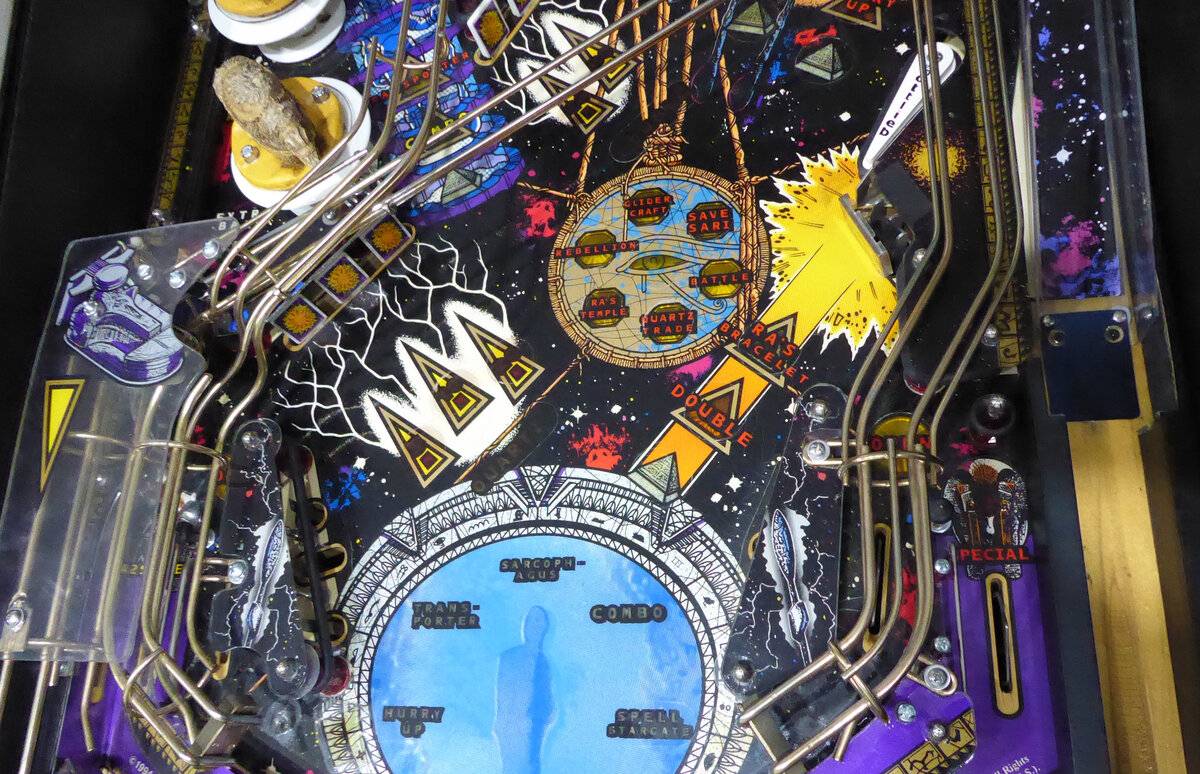 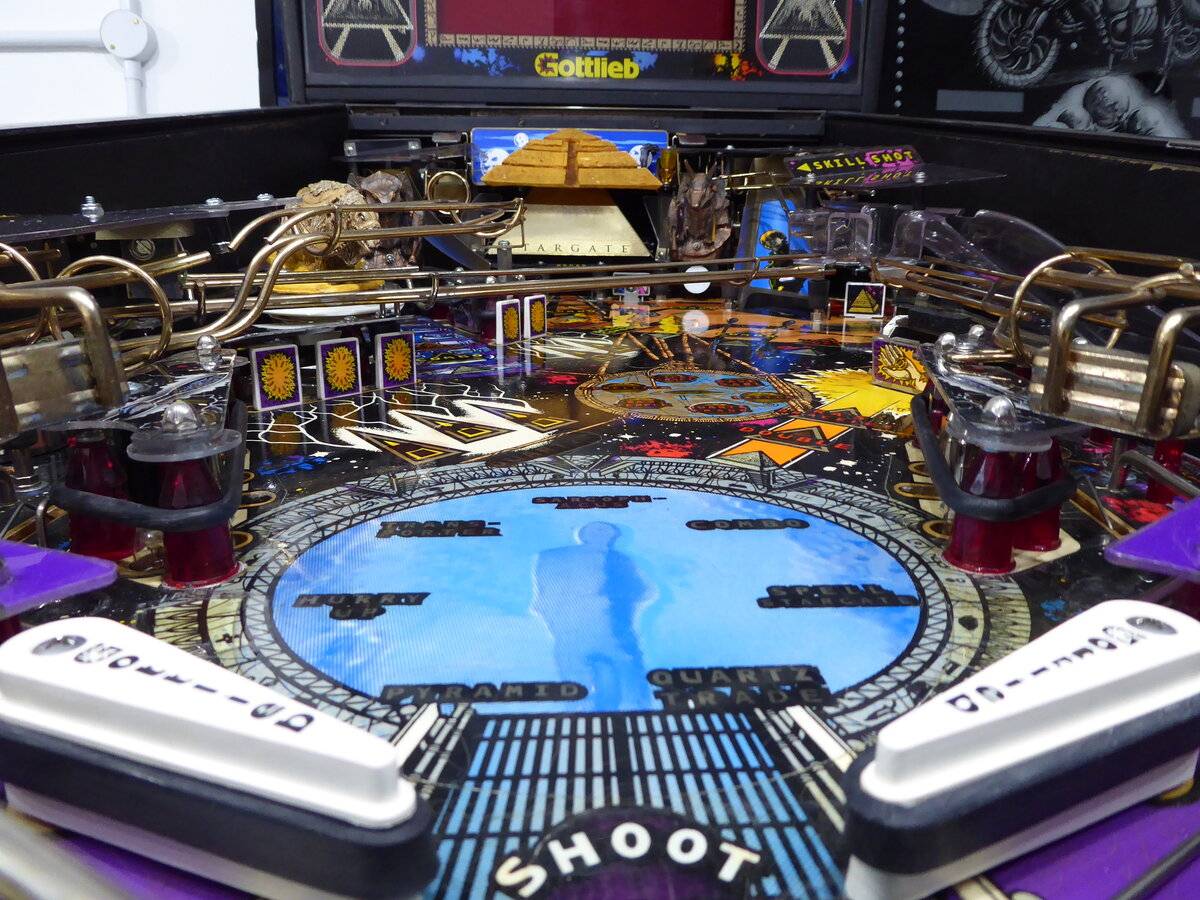 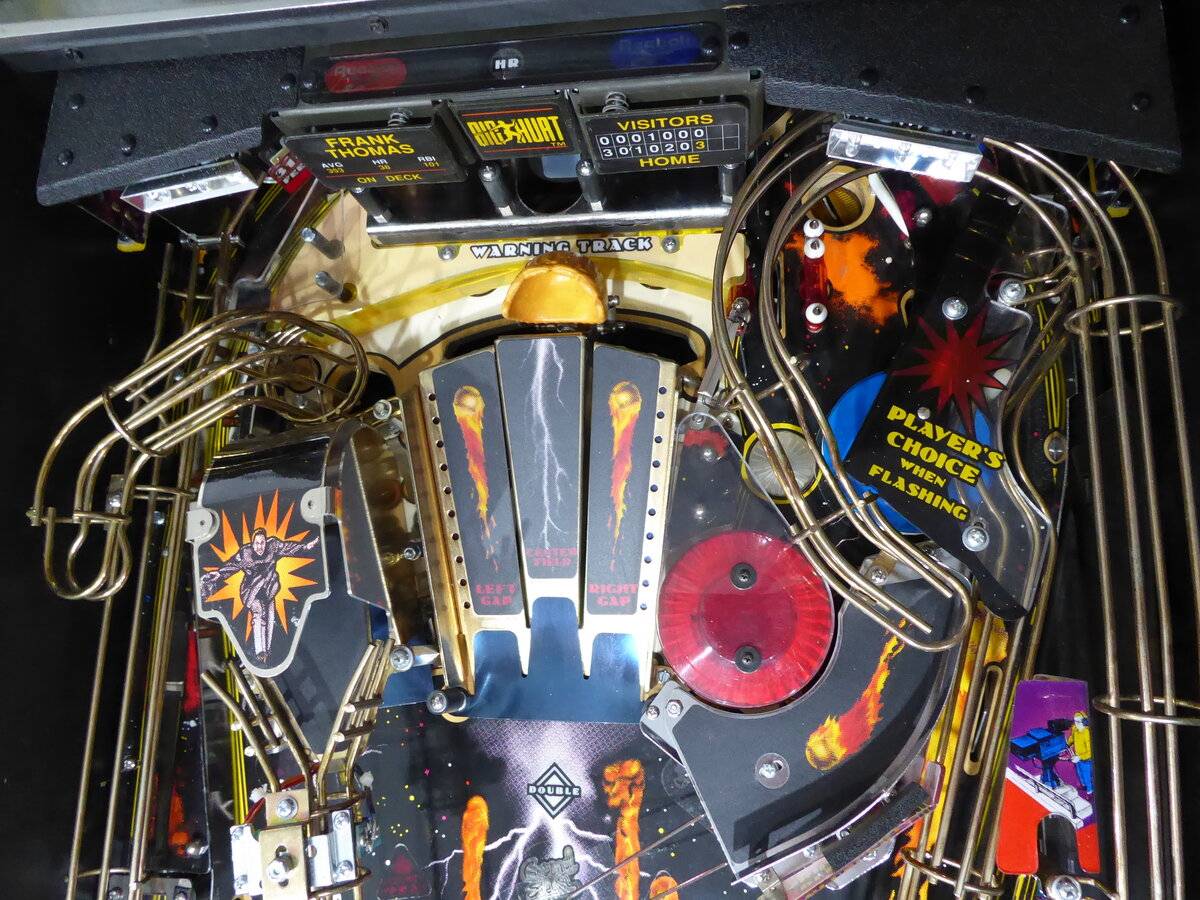 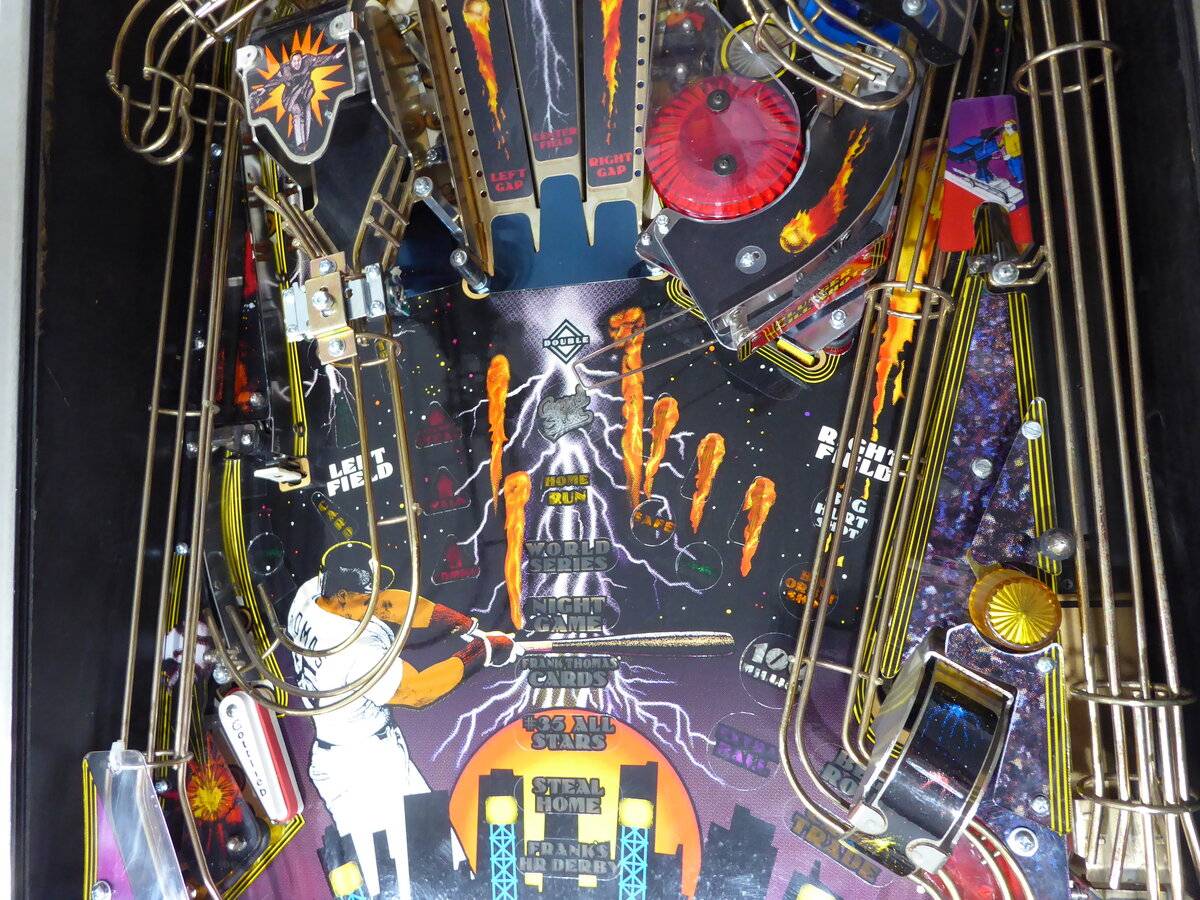 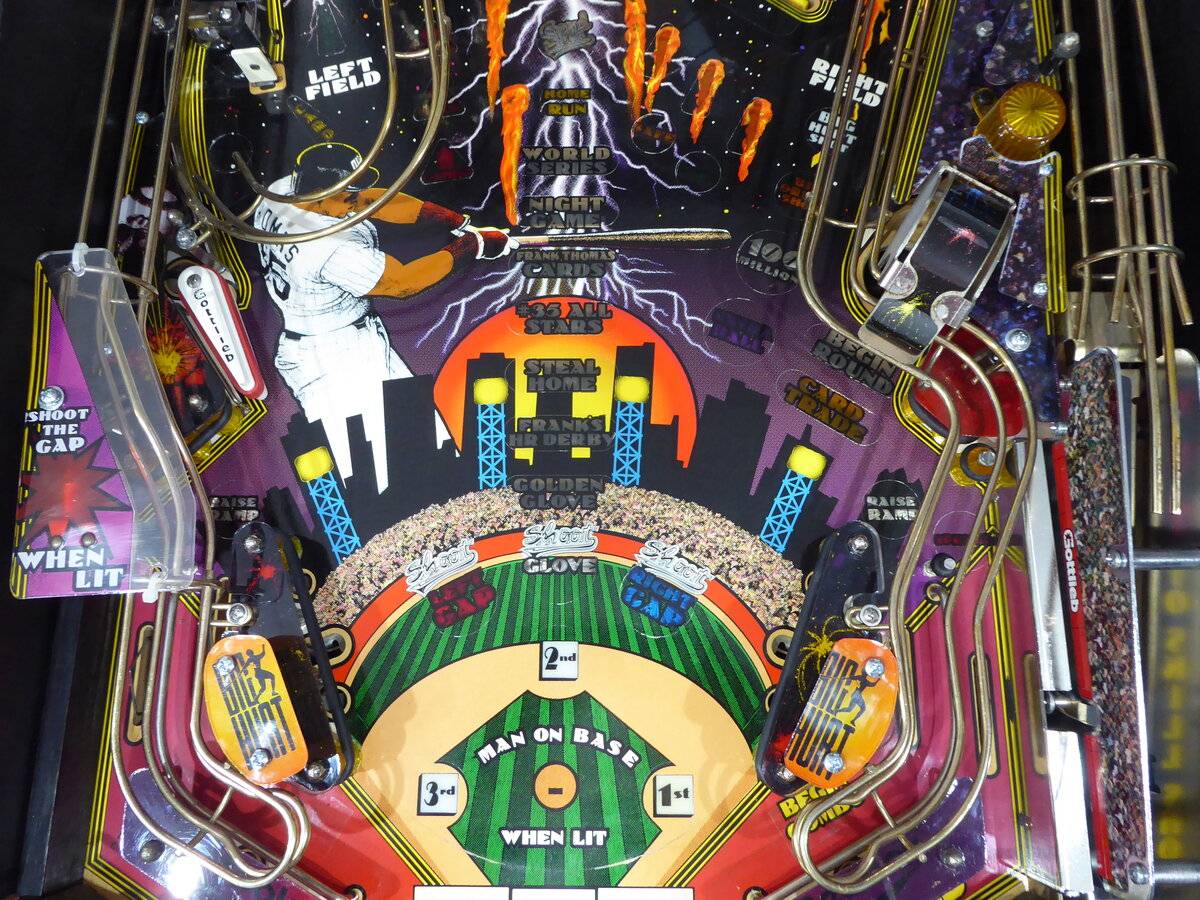 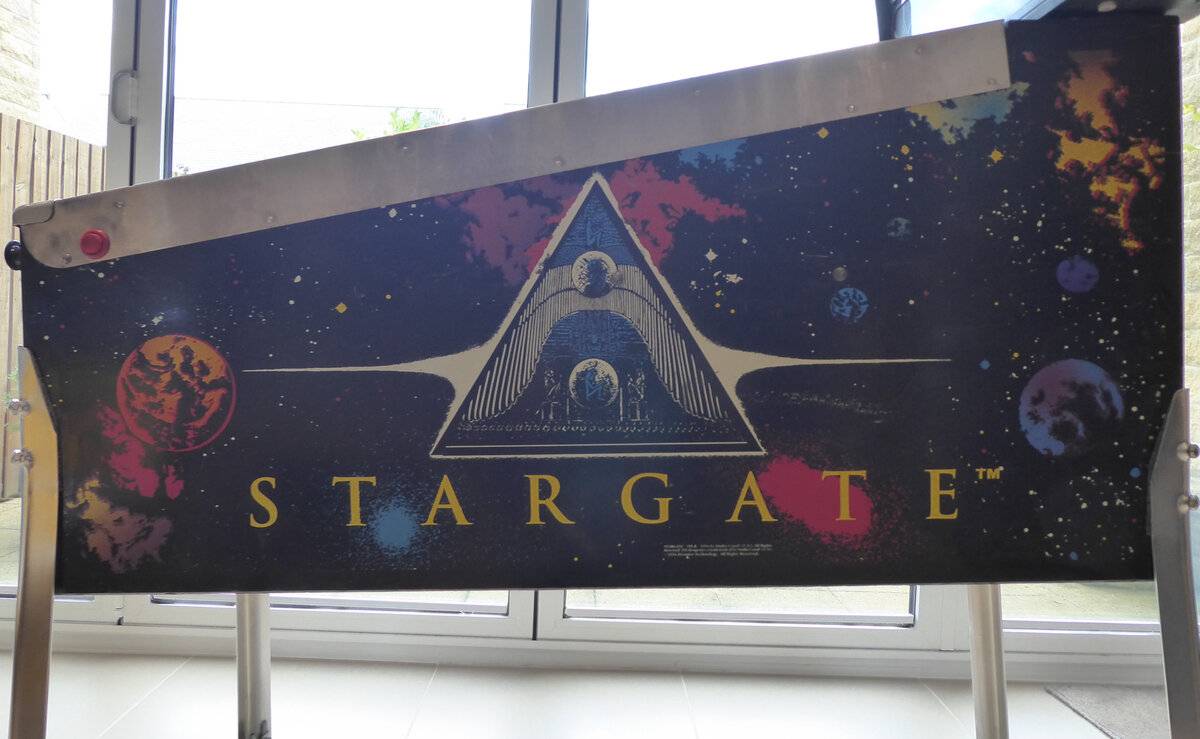 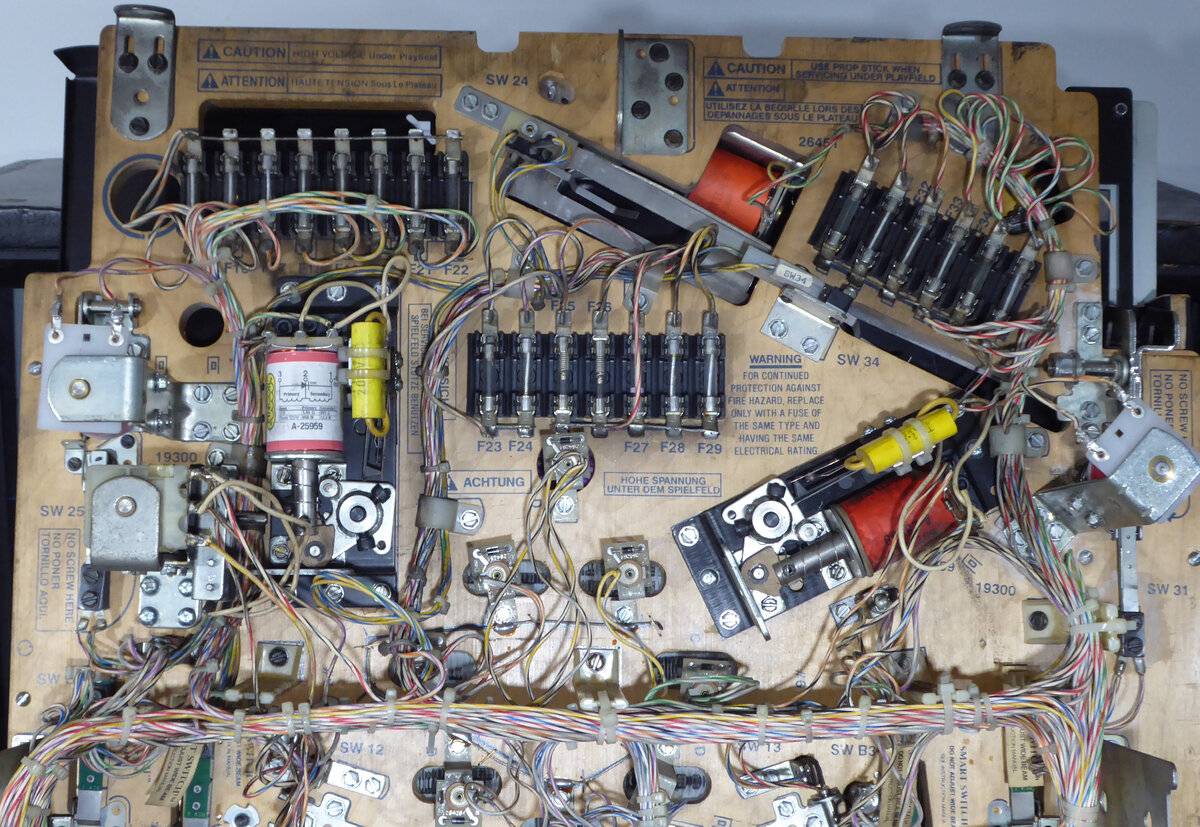 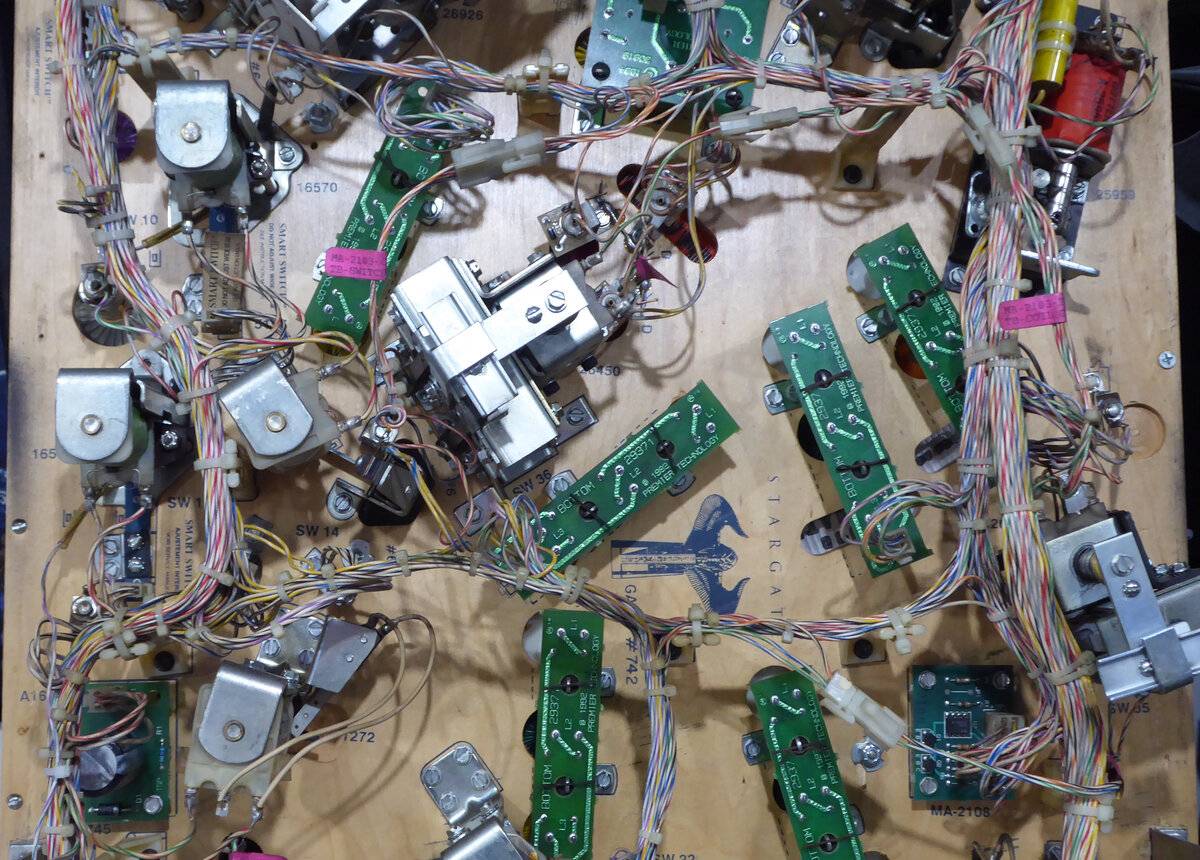 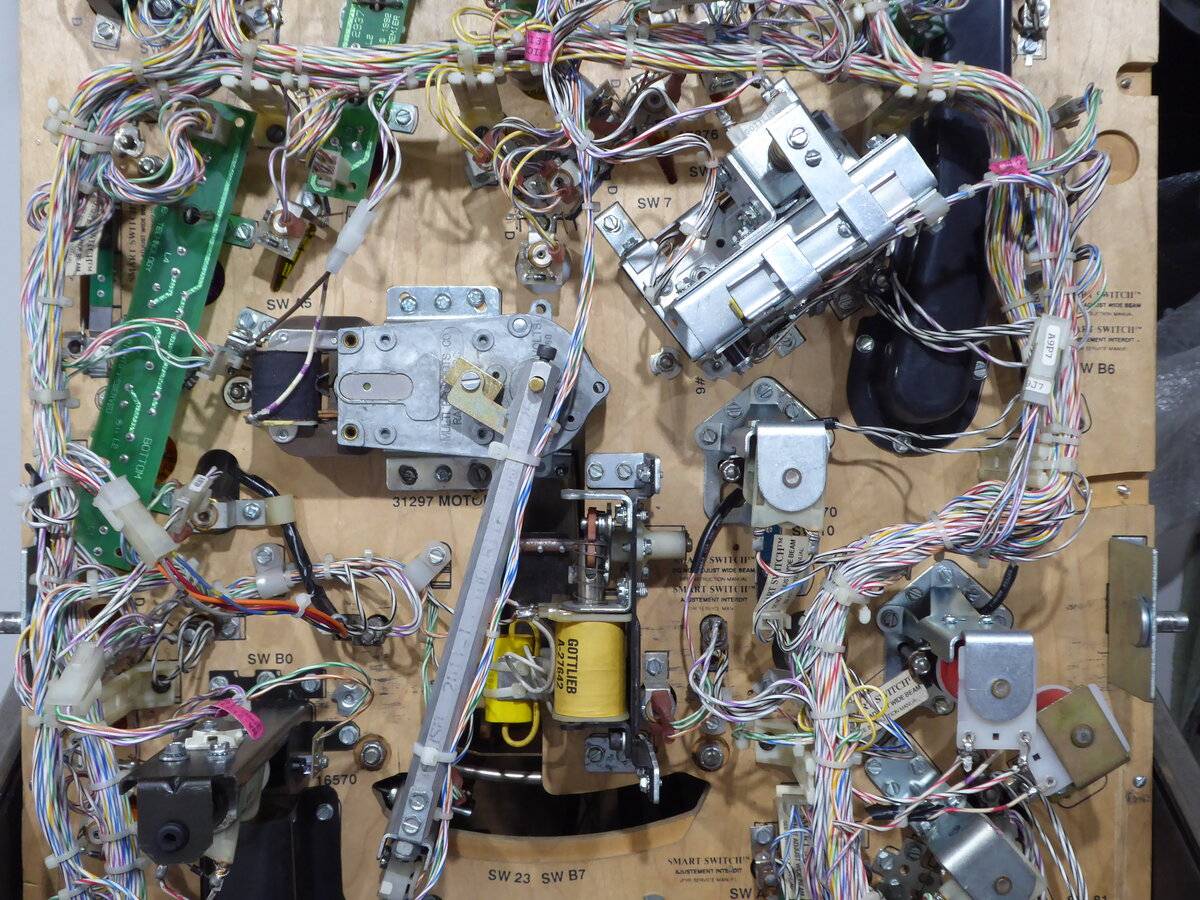 What an interesting concept. Do you have to change the MPU when you switch games?
OP
OP
M

You just have to swap the ROMs over and perform a factory reset. The pdf attachment has all the detail.

Absolute bargain for someone. 2 games in one and a neat storage solution for the game not in use. Perfect . Very well thought out.

Someone here was after a stargate

russdx1 said:
Someone here was after a stargate
Click to expand...

I got mine a good few months ago.
Before that @paddythegreek was after one, not sure if he still is...
OP
OP
M

I think Pinball2000 already proved this is a flawed idea with no market. Better off putting the other game in another cabinet.
OP
OP
M

I don't disagree that it would be prefereable to have the games in their own cabinets, but the days of getting hold of a cheap cab complete with transformer panel, looms, boads etc. are long gone. I think this is a reasonable compromise to save the second playfield from being parted out and if someone is short of space then it is 2 pins in the space of one as well.

Martin Riley said:
I don't disagree that it would be prefereable to have the games in their own cabinets, but the days of getting hold of a cheap cab complete with transformer panel, looms, boads etc. are long gone. I think this is a reasonable compromise to save the second playfield from being parted out and if someone is short of space then it is 2 pins in the space of one as well.
Click to expand...

Im quickly running out of space, so the idea of another PF to swap in to change things every few months really appeals.

Interesting offer but it's a "1-in 1-out" scenario (and the 1-in is already here) so unfortunately I can't take any trades.

Martin Riley said:
Interesting offer but it's a "1-in 1-out" scenario (and the 1-in is already here) so unfortunately I can't take any trades.
Click to expand...